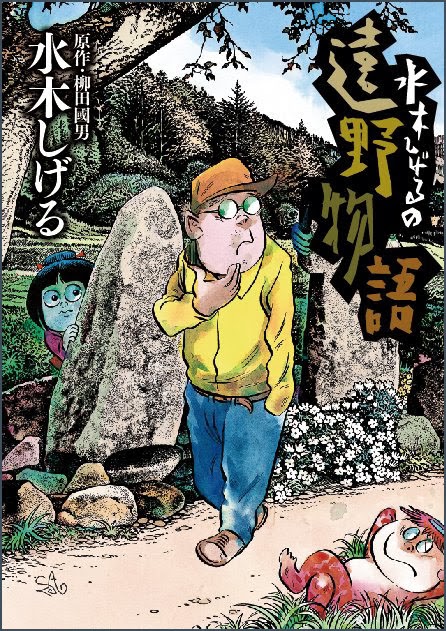 
- quote
The term Yama-bito (山人), as understood in Japanese folklore, has come to be applied to a group, some scholars claim, of ancient, marginalized people, dating back to some unknown date during the Jomon period of Japanese history.

Tono Monogatari
According to Yanagita, the Yamabito were "descendants of a real, separate aboriginal race of people who were long ago forced into the mountains by the Japanese who then populated the plains" during the Jomon era.

Yanagita wrote down these folktales in the book Tono Monogatari, though as author Sadler notes:
"The book is a classic of folklore, but it has none of the usual trappings of a volume of folktales. There is no attempt to classify. There are no headings and no categories. The book is a ramble, and a hodge-podge. You will find fairy tales and legends and even an occasional myth in it; but you will also find the stuff of the tabloid newspapers: Distraught youth murders mother with sharpened scythe or, Hayseed knifes mom."

kamikakushi 神隠し
One of the concepts Yanagita presents in Tono Monogatari is that of, literally, being spirited away, or kamikakushi. As author Sadler relates:
"A young girl is at play under the pear tree in her yard one evening toward dusk, and in the next instant she is gone, vanished. Thirty years later the occupants of her old family home are surprised by a visitor whom they recognize at once as this child, now grown to womanhood. She looks haggard and old. She is silent, except for the half-apologetic remark that she 'just wanted to see everyone once more,' and then she departs as silently and mysteriously as she came. Evidently no one attempts to follow her, and no one asks her to stay. Her story remains untold. No one wants to hear it. They know what it is. She is kamikakushi ... literally, she has been hidden by the kami, by the spirits. She has been enslaved by some supernatural being. "
© More in the WIKIPEDIA ! 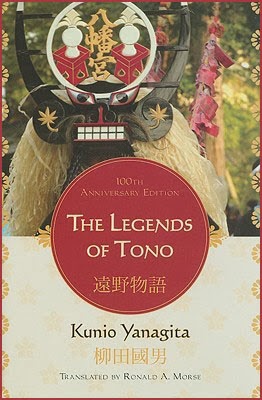 - quote
. . . Futuristic cities, or the romance of samurai and geisha — for many foreigners, these are the twin poles around which Japanese culture revolves. But there is another, deep history that feels as though it’s been present in Japan for millennia despite only being documented in the past century. In 1912, bureaucrat Kunio Yanagita published a book that spawned an entire scholarly discipline, minzokugaku (folklore studies): “Tono Monogatari (The Legends of Tono).” It’s no coincidence that the Japanese title of Inoue’s “Tales from a Mountain Cave” is “Shinshaku Tono Monogatari” — shinsaku meaning “a new version” or, perhaps, “revisited.”

The original legends of Tono are not, it is certain, tales to read to children. There is the infamous “Tale 69,” of a girl who loved her horse so deeply that “they became husband and wife” — until her appalled father hangs the animal from a mulberry tree. “Tale 55″ laconically records how women in a certain village are often made pregnant by kappa, water spirits — and that the resulting infants are so grotesque they are chopped in pieces and buried in wine casks.

Yanagita’s source was an educated young man from a peasant family who told the scholar his stories in 1909. “Tales from a Mountain Cave” likewise opens with author Inoue introducing his source, but we’ve jumped over two world wars in the interim. The year is 1953 — though at first glance you’d hardly know it. Here again is a sorrowful tale of a girl who loves her horse too much; a lost traveler who discovers a baby in the cooking pot at the house where he seeks shelter; a pond with a curious guardian; and more kappa, leaving the women alone this time, but still up to no good.

They ought to seem laughable, these relics of a Japan that existed before Hiroshima and Nagasaki, before the postwar ningen-sengen (Humanity Declaration) of the Emperor Showa, here being dragged into the 1950s. And yet Inoue’s stories are woven tightly to the fabric of contemporary history. The tale of the carter’s daughter, Aoe, and her horse Shiro is set in wartime, its outrageous conclusion precipitated by the arrival in their village of soldiers requisitioning horses for army transport. A yarn of gruesome revenge that makes creative use of a wooden box comes from the eve of war, when a group of mineworkers go on the run. Inoue himself is a university dropout, forced to work in a sanatorium to make ends meet in the tough postwar years, while the tale-teller, is a former professional musician uprooted from Tokyo. (Or is he?)

All the tales play out against a backdrop of rural hardship.
No tsunami breaks during “Tales from a Mountain Cave” (although the original “Legends of Tono” contains the story of Fukiji who lost his wife in a such a wave and lives with his children in a shelter on the site of their destroyed home). Instead, famine bites so hard that fathers sell their daughters, a young man has to live as an unpaid labourer in the fields of his rich relatives, taxes are unendurable, children drown, and men accused of crime are forced into bonded labor. Yet amid all the poverty and struggle is a magical world of trickster creatures, where true love is real (if sometimes ill-advised) and fortunes may mysteriously be made (if always at a price).
In “Tales from a Mountain Cave” the residents of the Ofunato-Kamaishi-Kesennuma region don’t just survive — their lives are touched with wonder, and anything can happen.
- source : japantimes.co.jp

mountain man--
off to plow his field
five, six miles away

Unedori is a famous match-making deity.
To be united with your love, write your wish on a strip of red cloth and tie it to the tree with only your left hand .
Unedorisama has become popular as a “power spot,”


Mount Hayachine 早池峰 is closely related to the belief in Fudo Myo-O.
.