in a version from Okayama

This story is alive in Japan in various versions, even Rakugo.

The story dates back to a time when ordinary people did not have mirrors and have never even seen one.
Not even the nun had ever seen a real mirror in her life . . .
Before the Meiji period, mirrors were sacred objects. Most were made of bronze. Glass mirrors as we know them today were introduced in Japan much later. 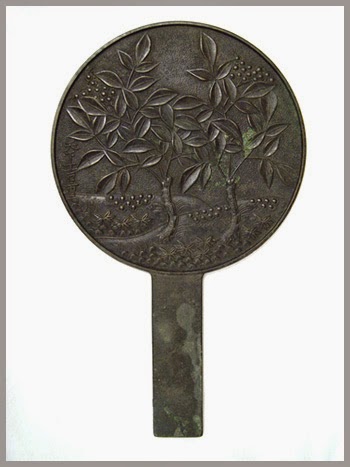 Once upon a time
there lived a young couple in a small farming village. When his father died, the young man was very sad and prayed all day at home in front of the family altar and at the graveyard, forgetting to do the necessary field work.
So his wife reprimanded him after the 47th day of official mourning was over and suggested, he might make a pilgrimage to Konpira san and then come back refreshed for work.

So off he went to Shikoku, walked all the steep steps up to the shrine, prayed for his father and then walked down the steps. On his way back had a look in the many souvenir shops at the roadside. Suddenly he was quite surprized !
His father was sitting there in a shop !
He bought "his father" and made his way home, overjoyed to have his father back.
In fact he had seen a mirror reflecting his own face, and since he looked just the same as his father, he got his father back!

At home he placed the mirror into a box and looked at it every day. In the morning he greeted his father and told him he was off to field work, in the evening he reported to his father what he had done all day.
His wife eventually got a bit suspicious about him mumbling to the box every day and she peeked inside too.
Well, what a surprise - her husband had hidden a beautiful young woman in a red dress.
When the husband came home she asked him about his new love. He denied everything and said it was his father he was talking to. They begun to fight in loud voiced.

A nun who was just passing her home came inside and reprimanded them:
"You are young couple, you should not fight but work together!
What is the problem?"

So they told her of the father, the woman in the red dress and the anger of the young wife (who wore a red dress . . . as you guess right).
The nun said:
"Let me see this new mistress of your husband!"
and when she looked into the mirror, she smiled happily.

"Nothing to worry, you dear woman. The mistress has already shaved her head and become a nun!
So now you can live happily with your husband!"

This is a type of story called 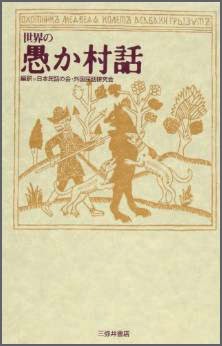 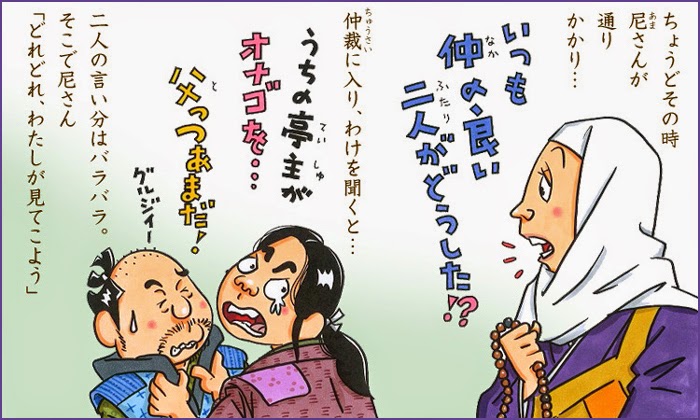 This story dates back to a time when people did not have mirrors and most have never even seen one.

Here the farmer is named 太郎作 Tarosaku and gets a mirror from the local lord, who was so impressed with his filial piety. So he hid the mirror in a box . . . and the rest is as above. 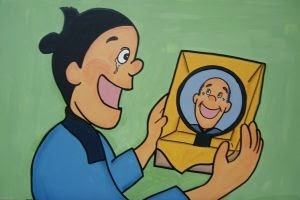 
Look at the scroll in the museum archives :
- source : dl.ndl.go.jp -

A long long time ago, there lived in a quiet spot, a young man and his wife. They had one child, a little daughter, whom they both loved with all their hearts. I cannot tell you their names, for they have been long since forgotten, but the name of the place where they lived was Matsuyama, in the province of Echigo. 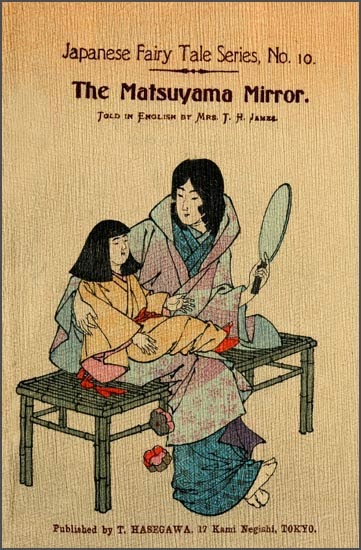 It happened once, while the little girl was still a baby, that the father was obliged to go to the great city, the capital of Japan, upon some business. It was too far for the mother and her little baby to go, so he set out alone, after bidding them good bye, and promising to bring them home some pretty present.

The mother had never been further from home than the next village, and she could not help being a little frightened at the thought of her husband taking such a long journey, and yet she was a little proud too, for he was the first man in all that country side who had been to the big town where the King and his great lords lived, and where there were so many beautiful and curious things to be seen.

At last the time came when she might expect her husband back, so she dressed the baby in its best clothes, and herself put on a pretty blue dress which she knew her husband liked.

You may fancy how glad this good wife was to see him come home safe and sound, and how the little girl clapped her hands, and laughed with delight, when she saw the pretty toys her father had brought for her. He had much to tell of all the wonderful things he had seen upon the journey, and in the town itself.

“I have brought you a very pretty thing,” said he to his wife: “it is called a mirror. Look and tell me what you see inside.” He gave to her a plain, white wooden box, in which, when she had opened it, she found a round piece of metal. One side was white like frosted silver, and ornamented with raised figures of birds and flowers, the other was bright as the clearest crystal. Into it the young mother looked with delight and astonishment, for, from its depths was looking at her with parted lips and bright eyes, a smiling happy face.

“What do you see?” again asked the husband, pleased at her astonishment, and glad to show that he had learned something while he had been away. “I see a pretty woman looking at me, and she moves her lips as if she was speaking, and—dear me, how odd, she has on a blue dress just like mine!” “Why, you silly woman, it is your own face that you see,” said the husband, proud of knowing something that his wife didn’t know. That round piece of metal is called a mirror, in the town every body has one, although we have not seen them in this country place before.

The wife was charmed with her present, and, for a few days could not look into the mirror often enough, for you must remember, that, as this was the first time she had seen a mirror, so, of course, it was the first time she had ever seen the reflection of her own pretty face. But she considered such a wonderful thing far too precious for every day use, and soon shut it up in its box again, and put it away carefully among her most valued treasures.

Years past on, and the husband and wife still lived happily. The joy of their life was their little daughter, who grew up the very image of her mother, and who was so dutiful and affectionate that every body loved her. Mindful of her own little passing vanity on finding herself so lovely, the mother kept the mirror carefully hidden away, fearing that the use of it might breed a spirit of pride in her little girl.

She never spoke of it, and as for the father, he had forgotten all about it. So it happened that the daughter grew up as simple as the mother had been, and knew nothing of her own good looks, or of the mirror which would have reflected them.

But bye and bye a terrible misfortune happened to this happy little family. The good, kind mother fell sick; and, although her daughter waited upon her day and night, with loving care, she got worse and worse, until at last there was no hope but that she must die.

When she found that she must so soon leave her husband and child, the poor woman felt very sorrowful, grieving for those she was going to leave behind, and most of all for her little daughter.

She called the girl to her and said; “My darling child, you know that I am very sick: soon I must die, and leave your dear father and you alone. When I am gone, promise me that you will look into this mirror every night and every morning: there you will see me, and know that I am still watching over you.” With these words she took the mirror from its hiding place and gave it to her daughter. The child promised, with many tears, and so the mother, seeming now calm and resigned, died a short time after.

Now this obedient and dutiful daughter, never forgot her mother’s last request, but each morning and evening took the mirror from its hiding place, and looked in it long and earnestly. There she saw the bright and smiling vision of her lost mother. Not pale and sickly as in her last days, but the beautiful young mother of long ago. To her at night she told the story of the trials and difficulties of the day, to her in the morning she looked for sympathy and encouragement in whatever might be in store for her. So day by day she lived as in her mother’s sight, striving still to please her as she had done in her life time, and careful always to avoid whatever might pain or grieve her. Her greatest joy was to be able to look in the mirror and say; “Mother, I have been today what you would have me to be.” 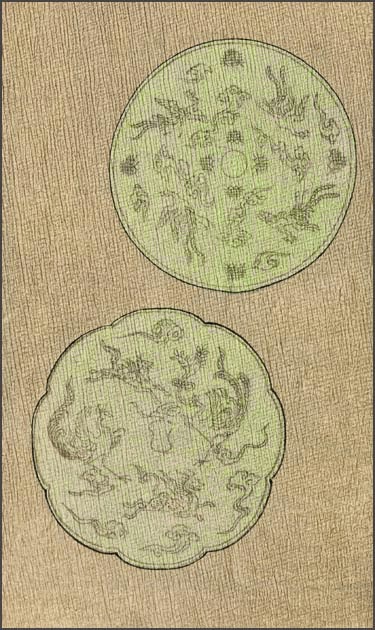 Seeing her every night and morning, without fail, look into the mirror, and seem to hold converse with it, her father at length asked her the reason of her strange behaviour. “Father,” she said, “I look in the mirror every day to see my dear mother and to talk with her.” Then she told him of her mother’s dying wish, and how she had never failed to fulfill it. Touched by so much simplicity, and such faithful, loving obedience, the father shed tears of pity and affection. Nor could he find it in his heart to tell the child, that the image she saw in the mirror, was but the reflection of her own sweet face, by constant sympathy and association, becoming more and more like her dead mother’s day by day. 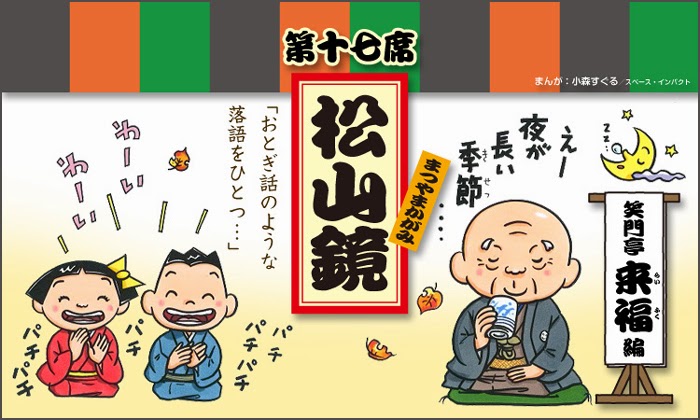 as told in a rakugo story 落語演目
- source : wikipedia

The story takes place a long time ago in Matsuyama village.
At that time, mirrors were rare and not everyone knew what they were. One day, a farmer named Shosuke saw a mirror without knowing what it was . . .
- reference in English -

When you use water like a mirror, you can see the face of a person you want to curse. If you say the appropriate ritual curse (呪言, 怨言) this person will certainly encounter misfortune.
Some stories of this kind are told at the temple 唐招提寺 Toshodai-Ji in Nara.

There are more Suikyo Tenjin shrines and Suikyo Jinja 水鏡神社 Suikyo shrines in Japan, this will be explored in another entry.

Kagami 香我美(かがみ) is also a place name - careful when googeling with hiragana.