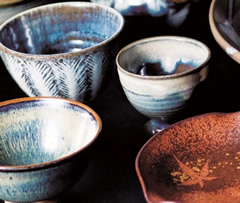 - Shodai Ware
When 細川忠利 Hosokawa Tadatoshi moved from the fief of Buzen to take control of the fief of Higo in 1632, two master potters were appointed.
One of these was 源七 Genshichi, the first of a long line of potters of the Hinkoji family, and the other was 八左衛門 Hachizaemon, the first of successive generations of potters from the Katsuragi family. It was the appointment of these two men that is said to have marked the beginnings of the making of Shodai Yaki.
Much later on in 1836 and under a directive from the local clan, Senoue Rinemon, an official of the Shogunate, built the Senoue kiln as part of a program promoting industry in the area. The skills and techniques associated with the production of Shodai Yaki have been handed down over the years and it is the Noda, Chikashige and Joshima families, which have inherited them and still use them to this day.
Made from a local iron rich clay,
a particular feature of this ware is its bold and yet simple character. By modifying the blend of glazes and by utilizing the changes which take place at different firing temperatures, delicate control is exercised over the production of colors for the blue, yellow and white Shodai Yaki. In addition, the dribbled, extravagant patterns and the depth of color of the glazes harmonize with the forms of the pieces, to produce this sense of bold simplicity.
- Feature
Shodai Yaki features simple and robust touch made from Shodai clay, which contains abundant iron. Proportion of glaze and firing temperature creates their subtle colorings varying from blue, yellow to white. The patterns created by dynamic glazing makes the unique harmony with its shape.
source : kougeihin.jp/en... 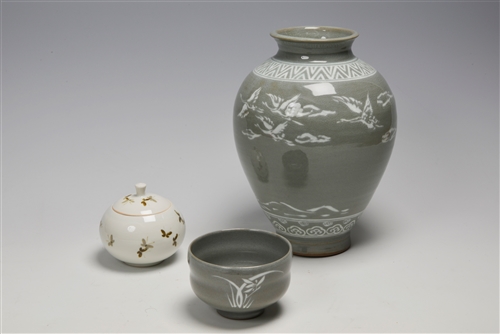 - Ceramics
Kumamoto’s modern ceramics industry began about 400 years ago.
When the Hosokawa family moved to Higo Province (now Kumamoto) in 1632, potters also settled in the area and built kilns. Koda ware from Yatsushiro and Shodai ware from Arao and Tamana developed under the patronage of the Higo Domain, primarily producing ceramics used in traditional tea ceremony. In addition to these, there was Matsubase ware from Uki, Oda ware from Uto (Higo Domain’s only porcelain ware), and Mizunodaira, Takahama, and Maruo wares from Amakusa.
- Shodai Ware
Shodai ware originated about 400 years ago in northern Kumamoto. It became an official pottery kiln of the Higo Domain in the Edo Period and made ceramic cups used in traditional tea ceremony as well as various wares used ineveryday life.
Shodai clay has high iron content and is full of pebbles. Straw and wood ash is used in the glaze to create a simple yet dynamic style.
- Amakusa Ceramics
n the Amakusa region, porcelain ware is made using the region’s abundant porcelain stone (of which Amakusa is the top producer in the country), and earthenware is made using local clay deposits.
The production of porcelain ware in the region started 340 years ago, while the production of earthenware started 250 years ago. White porcelain pieces with a translucent quality as well as unique earthenware pieces are made in abundance.
- Koda Ware / Kōda ware 高田焼 Kōda-yaki - photo above
Koda ware first started being made in Yatsushiro City in 1632 during the early Edo Period. The designs are made not by painting, but rather by embedding white kaolin into the motifs carved into the clay.
The pottery is fired after applying a transparent glaze, and turns a slight teal color due to the iron content in the clay.
- source : kumamoto-kougeikan.jp... - 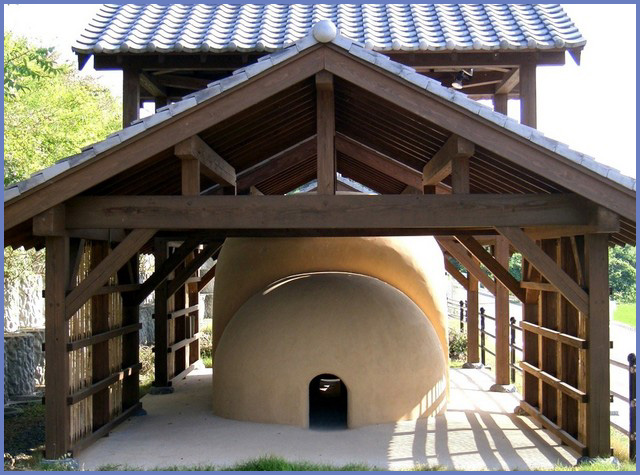