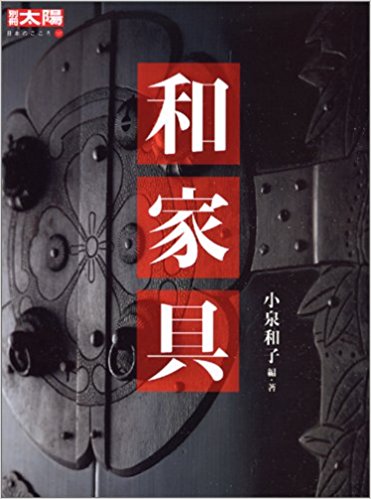 quote
The traditional Japanese household had furniture and features that were directly related to the Japanese culture: simplicity, functionality, and the attention to nature and space.
- - - - - Japanese Furniture: History and Style
Imagine that every single thing you owned had a purpose and place, and you're coming pretty close to imagining a traditional Japanese household. Great thought and care were given to the culture when designing Japanese furniture. Every piece, while simple, had a function and elegance that helped enhance the living area of the family it belonged to.
- - - - - Traditional Japanese Homes
If you were to look at the interior of a Japanese household, the first word that comes to mind might be 'sparse'. This is because in traditional Japanese houses, from ancient times to the present, there was very little furniture to sit or sleep on. Without chairs or bedding, the Japanese generally used the floor to sit and sleep on. This is because the Japanese believe in the concept of ma, or negative space and a desire for simplicity. Objects would be placed very far apart, as the traditional Japanese believed that this space encouraged creativity. ...
- - - - - Types of Furniture
Even though their spaces often appeared to be mostly empty, that was not the case. There were several main kinds of furniture that could be found in traditional Japanese homes. Most of the furniture was made of wood, and much of it had handles on the sides so it could be picked up and moved if needed for aesthetic reasons or in response to a fire. Since the homes were made mainly of wood and rice paper, fires were a common occurrence.

Furniture in Japan had three main purposes:
sleeping and sitting, prayer, and storage.

To replace seating and sleeping furniture, a mat called a tatami was used. Tatami mats were made of woven straw and could be arranged in multiple ways.
There were also Buddhist prayer tables and altars found in most households.
They were made of wood and were usually simple in design, though wealthier households sometimes had altars that were gilded (covered with gold) and ornately carved.
A chest, or tansu,
was first used in the 700s in Japan. This armoire had doors that opened and drawers. The tansu was used for clothing storage and was generally very utilitarian, though sometimes these chests had iron banding or decorations. A tansu used in the kitchen was called a mizuya, and it differed from clothes storage in that it had sliding doors to hide utensils and dishes.
A special kind of tansu was called the kaidan tansu.
This was a storage chest that was in the shape of a staircase and also often functioned as one. In place of doors, this chest had drawers that were equipped with iron handles.
source : study.com/academy/lesson/japanese-furniture... 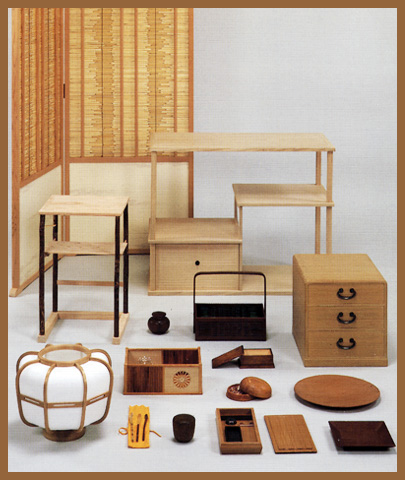 - quote -
Although this craft dates back to the Heian period (794-1185), specialist sashimono shi 指物師 cabinet makers did not appear until during the Muromachi period (1392-1573), when this form of joinery developed in step with the ceremonial drinking of tea. Beside a range of the finest traditional household furniture made in solid wood, many pieces of turnery, bentwood work and items made from boards are also fashioned from such woods as キリ paulownia (Paulownia tomentosa), スギ Japanese cedar (Cryptomeria japonica), クワ mulberry (Morus) and ケヤキ zelkova (Zelkova serrata).
Perhaps the most representative of the woods used is paulownia.
Being both moisture and heat resistant, products made of this wood represent the very best in household storage. Great care is taken with its preparation by ensuring that it is well seasoned and that any impurities are removed before the wood is worked. Apart from the many items which are made for use in association with the tea ceremony, some very finely crafted chest-of-drawers and wardrobes are also made. Freestanding shelves are also produced, sometimes for the display of fine china.
- source : kougeihin.jp.e... -


- quote -
Kyoto Traditional Furniture Museum
Kameyacho, Ebisu-gawa dori, Nakagyo Ward, Kyoto,
..... Deep in the heart of Kyoto city, there is a narrow street called Ebisugawa dori. This is THE street to go to for traditional Japanese furniture, from wooden screens and period items to bamboo to tansu!
In the heart of Ebisugawa dori is
Kyoto Sashimono Table Furniture Museum. Here they have documented the history of Japanese furniture down to the very last detail. I could spend hours reading the pattern guides and the design sketches for various items, let alone peering through the design magazines from forty, fifty, or even eighty years past. There are also lots of small furniture items and even toy furniture tools which would make a great souvenir or a special gift to keep for many generations. ...
- source : en.japantravel.com/kyoto... - 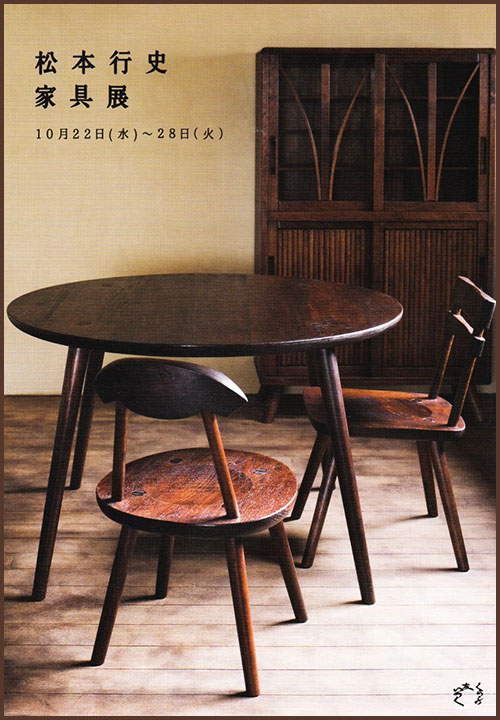 - quote -
Matsumoto furniture
Matsumoto-kagu furniture was first made in the latter half of the 16th century to meet the demands of people living in the area. Around the 18th century production of furniture such as chests of drawers and dining tables for everyday use began. With the development of transport, furniture began to be shipped to all parts of Japan, and became known throughout the country. Matsumoto furniture is made of timber such as zelkova and Japanese oak, and is assembled using traditional methods into extremely solid furniture. It is then coated with over ten layers of lacquer, which brings out its depth and beauty.
Chests of drawers, display shelves and low tables are still being made today.
Matsumoto furniture was designated a traditional craft in 1976.
Matsumoto Furniture Craft Association:3-2-12 Chuo, Matsumoto-shi, Nagano
- source : jnto.go.jp/eng/spot/handcrft -


. The Japanese Home - Introduction .
with a long list of furniture


. Kaguya Hime かぐや姫 .
Not related to 家具 kagu at all, but the daughter of a friend used to call herself thus, daddy being a kaguya 家具屋, maker of furniture.

Matsumoto in May means ‘crafts ‘
the factory, called Matsumoto Mingei Kagu (Matsumoto Folkcraft Furniture)
... in May, Matsumoto’s Craft Month. Shops and galleries throughout the city hold special exhibitions and events and, on the last weekend of the month, 300 exhibitors set up tents for the annual outdoor Craft Fair (this year it will take place on May 26 and 27, barring rain). Although most of the ceramicists, glassblowers, metalworkers, and woodworkers come from other parts of the country, there’s also a solid local contingent of people making things by hand.
...
nspired by the folk-art revival movement in Japan in the 1920s and ’30s, the elder Ikeda opened a small factory at the end of World War II. Today, the main company and 12 subcontractors produce 120 types of chair and many other sorts of furniture. Eighty percent of the work is done by hand, and a single chair can sell for ¥100,000.
...
https://www.japantimes.co.jp/life/2012/04/22/travel/matsumoto-in-may-means-crafts/#.WtQHaLhheXI