raden 螺鈿 mother-of-pearl - inlay
In England, it is also known as "Japaning". 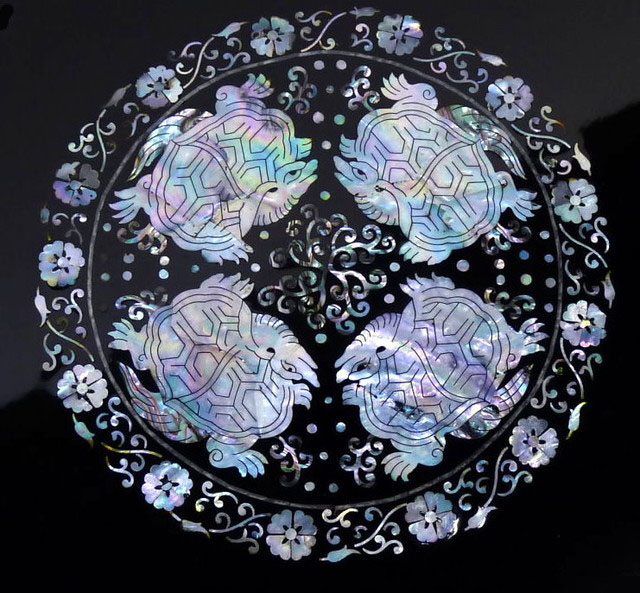 Shells are worn down into several thickness on a whetstone or grinder and cut into shapes, then pasted or inlayed on a wood or lacquered surface, and polished. The thickest shell decoration, a thinner application, and the thinnest use of shell are called atsugai 厚貝, usugai 薄貝 and kenma 絹磨 respectively.

Decoration with shells is also called kaisuri 貝摺. There are three ways of cutting shapes from shells:
kirinukihou 切抜法 (kirinuki ho, cutting out), suitable for atsugai, is cut with a scroll saw and finished with a file or rubstone;
uchinukihou 打抜法 (uchinuki ho, punching), for usugai, uses a punch with a template; and
fushokuhou 腐食法 (fushoku ho, eroding) which brushes patterns in lacquer on a surface of usugai paste, then applies hydrochloric acid so the unlacquered part is eaten away, before quickly washing it with water and peeling off the lacquer.

The raden technique, introduced from Tang dynasty China to Nara period Japan, was used with *mokuga 木画 (mosaic), kohaku 琥珀 (amber) and taimai 玳瑁 (tortoise shell). Taimai, also called bekkou 鼈甲, was used from the Nara period.
Taimaibari 玳瑁張り is a one kind of suki-e 透絵 (transparent painting) technique in which tortoise shell is covered over gold and silver foil and paint, and uses the *zougan 象嵌 (zoogan, inlay) technique together with raden.
Raden techniques developed greatly in the second half of the Heian period and were applied to architecture in combination with makie. Through the Kamakura period, raden was often applied to saddles. In the Muromachi period, Chinese and Korean raden ware was highly valued, and Japanese raden was influenced by them. In the Momoyama period, it was adopted into Nanban art nanban bijutsu 南蛮美術 (see *nanban byoubu 南蛮屏風). Honnami Kouetsu 本阿弥光悦 (1558-1637) and Ogata Kourin 尾形光琳(1658-1716) used raden and makie techniques. Raden techniques were also used for *inrou 印籠 (seal case), combs and scabbards. Famous raden craftsmen include Ikushima Toushichi 生島藤七 in the early Edo period,
Aogai Choubee 青貝長兵衛 (Aogai Chobei) and Somada zaiku 杣田細工 in the mid-Edo period, and Shibayama zaiku 芝山細工 in the late Edo period.
- More text and photos :
source : JAANUS


- quote -
Inlay craft called Zogan
"Zogan" is a Japanese traditional decorative technique.
A delicate motif is carved on a wooden surface, and then pieces cut out from shells or different colored wood are placed into the carved surface.
Because of rustic but universal beauty, inlay products can be used as both articles for daily use and gifts for others.
To deliver soothing warmth of wood to people’s daily lives, products are made carefully and cordially by women living in Iwate.

Kai-zogan (shell inlay)
Nacreous layers of shell pieces are inlaid on a surface of thick glossy ebony wood and walnut used for fine furniture, and shine beautifully.
A surface with Kai-zogan looks different according to the direction of a light ray, and that’s where its charm lies. Kai-zogan is a simple decorative technique to cut out nacreous layers inside a seashell into pieces of varied shapes and place them on a wooden surface.
A motif is carved on a wooden basis, and seashells are cut out into pieces to match the motif shape and are placed to fit exactly into the carved motif.
Development of a unique technique based on ancient traditional techniques

Our company’s Kai-zogan started with an idea of the former president inspired by the shine of seashells used in Raden (mother-of-pearl inlay) decoration of World Heritage “Chusonji Temple”. He wondered how Kai-zogan products could be brought closer to the people and offered as articles for daily use. Since then, we have developed our unique inlay technique based on a traditional decorative technique Raden through years of trial and error.

What makes Yumekobo unique is its original designs. For example, chopstick rests have a gently-curved shape to take advantage of a smooth wood surface and are decorated with a combination of several motifs, such as Japanese four seasons and lucky charms. They have gained popularity with a wide range of customers.

Moku-zogan (wood inlay)
Products made with natural materials can make people feel comfortable and relaxed when using them. That is the greatest charm of wood products. Moku-zogan is a decorative technique to cut out wood into pieces of varied shapes and place them on a wooden surface. The technique used to be called Mokuga in the Nara period.
Various color shades of wood materials make different impressions

Wood materials have various “colors” according to their types and growth environment. They are truly natural. Craftworkers need to have sensibility and technique to cut out wood into pieces and assemble them with consideration of natural color shades. Because different woods have different grain patterns and color shades, each product gives different impressions and textures, even though it has the same design. Such different impressions bring to life motifs, such as flowers, trees and animals.
In Yumekobo, we try not to color products as much as possible to express natural color of a solid wood material.

Walnut texture loved by both men and women
Walnut with impressive grain that has a muted color and solid feel is a wood material that serves as a base, which is used to highlight motifs. Walnut is popular among both men and women. One of the reasons for its popularity is that its dark color fits in well with the modern lifestyle if it is used for interior accessories and fancy goods. In Yumekobo, we make wood inlays by combining other wood materials with a light color, such as Japanese lime tree, Norway spruce, and yellow pine, which contrast favorably with a walnut canvas with a subdued color.
貝象嵌・木象嵌など木製品 岩手県 夢工房
- source : iwate-yumekobo.com - 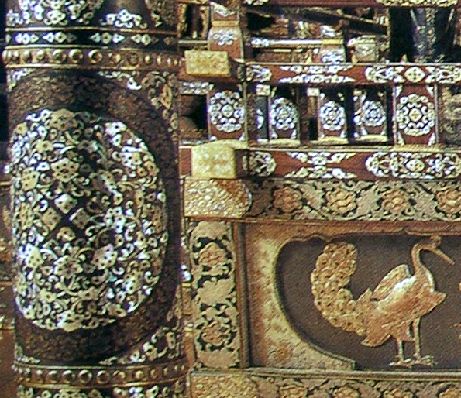 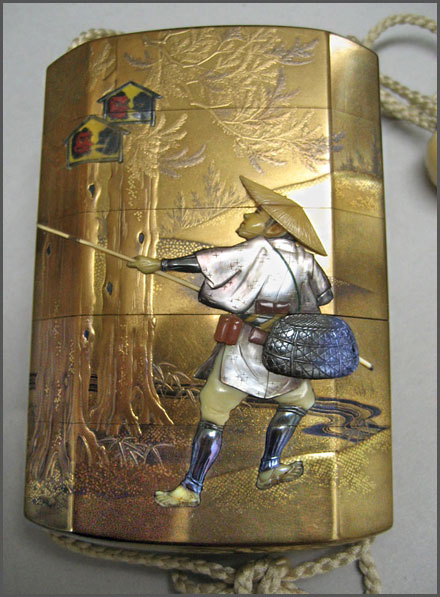 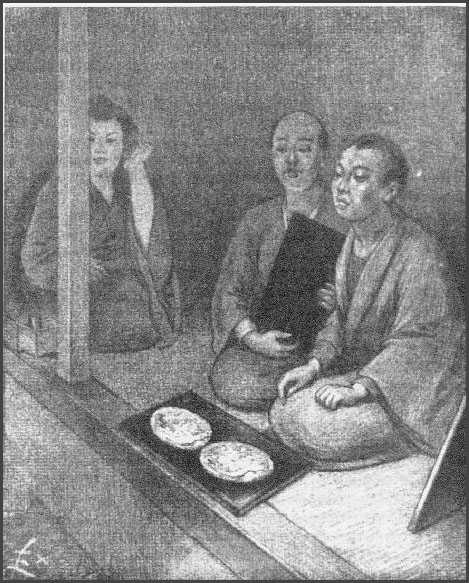 Aogai Choobei, Choobee 青貝長兵衛 Aogai Chobei
Tatsuke Chobei (1605 - 1649), from Nagasaki, working in Kyoto.
He developed the method aogai-zuri 青貝摺(ずり) "shaving the Aogai shell" to make thinner pieces, after learning it from Chinese craftsmen.
His shell decoration was imbedded rather then merely encrusted, ...

- quote -
There are many ways that raden is produced, with all techniques classed under three main categories: Atsugai (using thick shell pieces), Usugai (using much thinner pieces), and Kenma (the thinnest application of shell pieces).

In Atsugai raden, the shell is often cut with a scroll saw, then finished with a file or rubstone before application. In Usugai raden, the thinner shell pieces are usually made using a template and a special punch. Kenma raden is fashioned similarly to Usugai raden.

Methods of application are varied. Thick shell pieces may be inlayed into pre-carved settings, while thinner pieces may be pressed into a very thick coating of lacquer, or applied using an adhesive and then lacquered over. Other methods use acid washing and lacquering to produce different effects.
Raden is especially combined with maki-e, gold or silver lacquer sprinkled with metal powder as a decoration.
- source : wikipedia -

- quote -
Higo Zogan is made by engraving designs with great detail into an iron base, which is then inlaid with gold and/or silver.

It originated from the traditional motifs and techniques to decorate guns and swords for the Samurai class. In the 17th century, gun craftsman Matashichi Hayashi, who was working for the province ruling Hosokawa family, is said to have started this technique on a gun shaft. Lord Tadaoki Hosokawa (Sansai) loved the design, and had him made tobacco pipes and knifes decorated with inlays, which he sold in the city. Under Hosokawa’s sponsorship, many masterpieces were born in this way.

This method does not use any glaze, emphasizing the natural beauty of the iron and gold. The layers of gold and silver makes the piece thick and heavy, because the cloth that is used to inlay is hand cut. Although the inlay technique was a symbol of samurai warriors, the late 19th century saw the samurai era end, and the demand for goldsmiths subside as a result. However, the technique was passed on, and it began to be applied to other objects like accessories and ornaments. In 1963, an organization for preserving the Higo inlaying technique was established. Living National Treasure Tahei Yonemitsu, and Tsuneo Tanabe, a holder of Important Intangible Cultural Property, led the organization mainly by training successors for the craft. As a result, there are about a dozen Higo Inlay artists in Kumamoto today.

Higo Inlay men’s cuffs, necktie pins, hat pins, etc. are popular items, which seems to be a natural progression from the elite samurai warriors to modern business warriors. However, there are also beautiful sophisticated pieces for ladies. Housewares and fountains pens are also made with Higo Inlays. To take an unusual example, imagine that someone wants an electric guitar inlaid! This is entirely possible as well. You can also try to make accessories and key holders yourself in Kumamoto if you feel up to the challenge. If you happen to be a fan of samurai movies, Higo inlay piece may awaken your samurai spirit!
- source : japan-brand.jnto.go.jp/crafts - 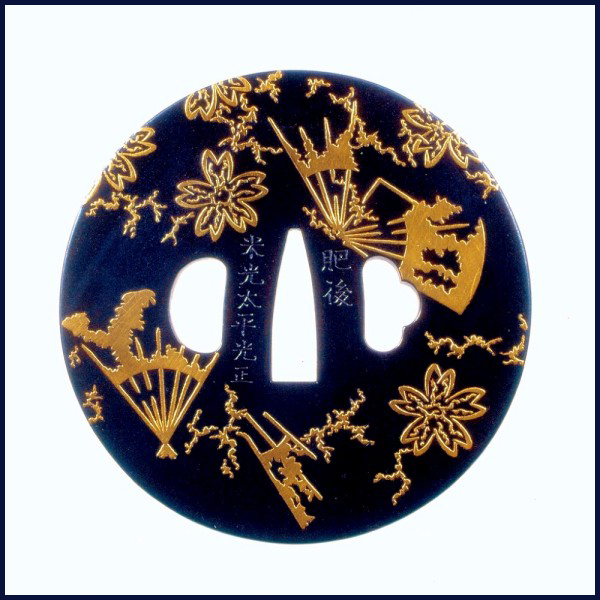 
The plum-blossoms falling,
Mother of pearl
Is spilt on the table.
Tr. R. H. Blyth

this end of the Koto -
Raden and plum blossoms
scattered around 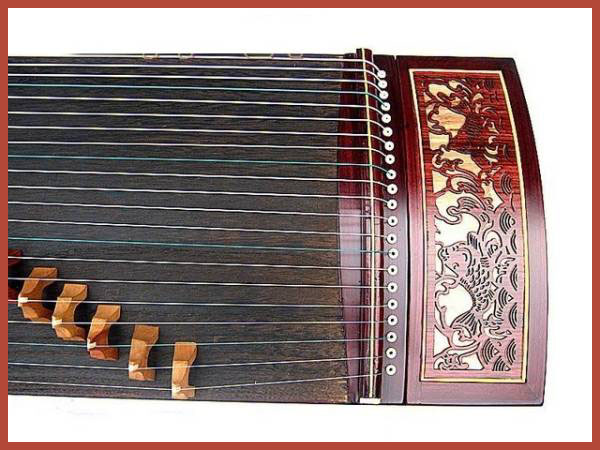 One end of the koto is called the "dragon's tail" (竜尾, ryūbi).

Email ThisBlogThis!Share to TwitterShare to FacebookShare to Pinterest
Labels: arts