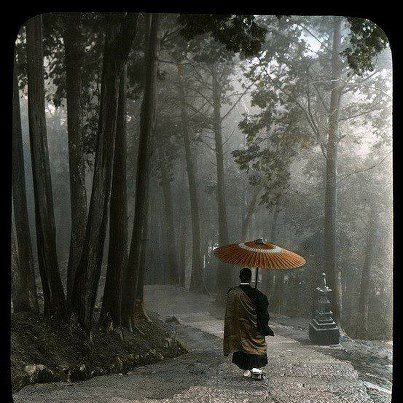 
. sakaki 榊 と伝説 Legends about the Sakaki tree .
This is the sacred tree of Japanese Shinto, Cleyera japonica.
71 to explore

On the island there is a valley called "Yanagi no tani 柳の谷", valley of the willow tree.
There was a time when a huge willow tree grew there, hence the name.
The tree was so huge that the ships coming in to the harbour could see it from afar and adjust their journey to it. So it helped to keep the local waterways quite safe.
In the nearby village there lived a beautiful girl called O-Ryu, who liked the tree very much. Every day she went to it, praised it and stroke its huge trunk.
The tree liked her visit and always stroke her back gently with its huge branches.

It was during the construction of a special large temple hall in Kyoto, the Sanjusan Gendo 三十三間堂, when everyone was looking for trees huge enough to support the heavy roof. Eventually a white arrow, sign of being chosen for the building, was stuck into the tree.

When the news spread, O-Ryu was all in tears and could not be consoled.
Then one day woodcutters came to the island and whacked their huge ax into the stem of the tree. The tree shook in pain - and O-Ryu, who stood nearby, also felt a pain as if a knife was stuck into her body.
Every time the woodcutters whacked at the tree, O-Ryu was hit by pain.
Finally the tree was felled and they tried to pull the heavy stem to the beach for transport by sea. But however many strong men pulled at the ropes, the stem would not move one bit.
O-Ryu went back to the Valley of the Willow tree, hugged the stem and bid it good bye. Then she sat on it - and oh wonder - the tree slid down to the beach with no further ado. The stem was shipped to Kyoto and is now a roof beam 棟木 of the famous Sanjusan Gendo Hall.


In Mie prefecture there is a another story about a huge willow tree for the Sanjusan Gendo Hall.
The roof beams for the hall had to be about 100 meters long and were not so easy to get.

Yooji Yakushi Doo 楊枝薬師堂 The Yakushi Hall of Yoji Village - 浄薬寺Joyaku-Ji
A huge willow tree of the village had to be felled and brought to Kyoto for the Sanjusan Gendo Hall, which was built on request of 後白河上皇 /後白河天皇 Go-Shirakawa Tenno (1127-1192). He had a severe headache all the time and wanted to construct a large temple to pray for healing.
Once the temple was built, the Emperor's headache was healed. 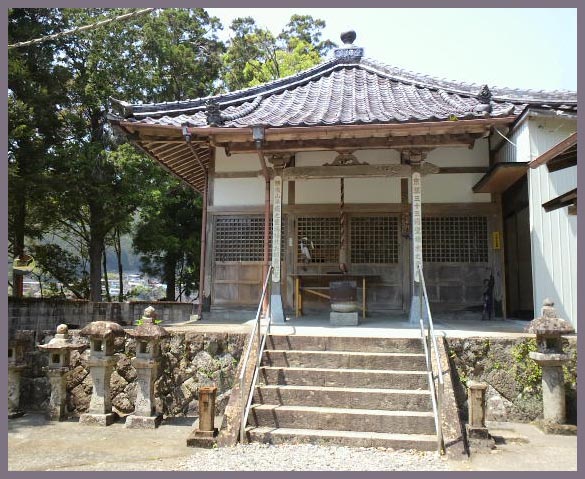 To show his gratitude for the willow tree, Go-Shirakawa himself carved a statue of 薬師如来 Yakushi Nyorai and placed it in a temple in the village, now called the Yakushi Hall of Yoji village, better known locally as
頭痛山平癒寺 "The temple which heales Headaches".
The present-day temple building dates back to 1411.

- - - - another version of the legend
In a former life 後白河法皇 Emperor Goshirakawa had been a mountain priest named 蓮華坊 Renge-Bo, but he had fallen into a ravine and lost his life. A willow tree grew on the spot, piercing the skull and causing the Emperor a constant headache whenever the wind blew the branches of the tree.
On a pilgrimage to Kumano to get rid of the headache, the Emperor learned of his former life and made a search for the skull. He buried the skull properly and used the willow tree to make a beam of the Sanjusan Gendo hall 柳で三十三間堂の棟木. Other versions say he had a Statue of Kannon made and placed the skull inside to show this greatfulness for being relieves of the headache.
. dokuro 髑髏と伝説 Legends about the Skull .


At the Sanjusan Gendo Hall in Kyoto, there is a
ritual services for the willow trees 柳のお加持 "Rite of the Willow" 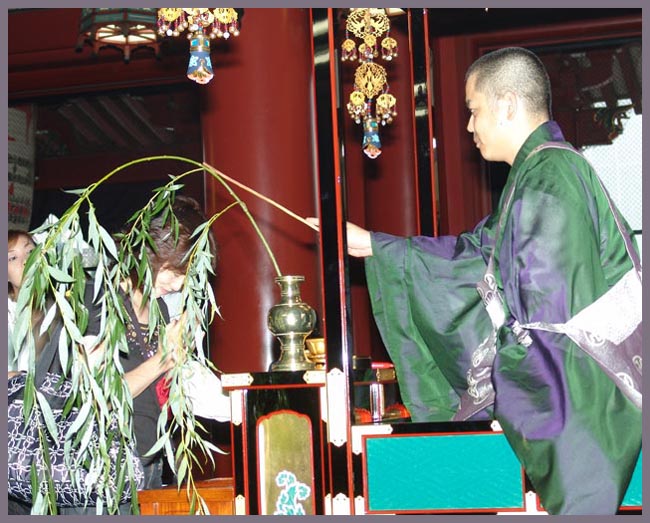 - quote -
Sanjūsangen-dō
The temple complex suffered a fire in 1249 and only the main hall was rebuilt in 1266. In January, the temple has an event known as the Rite of the Willow (柳枝のお加持), where worshippers are touched on the head with a sacred willow branch to cure and prevent headaches.
A popular archery tournament known as the Tōshiya (通し矢) has also been held here, beside the West veranda, since the Edo period.
- source : wikipedia -

- quote -
The Spirit of the Willow Tree
About one thousand years ago (but according to the dates of the story 744 years ago) the temple of 'Sanjusangen Do' was founded. That was in 1132. 'Sanjusangen Do' means hall of thirty-three spaces; and there are said to be over 33,333 figures of the Goddess Kwannon, the Goddess of Mercy, in the temple today.
- snip -
There lived in the village a young farmer named Heitaro, a great favourite, who had lived near the old tree all his days, as his forefathers had done; and he was greatly against cutting it down.
- snip -
On seeing this, Heitaro addressed the men. 'My friends,' said he, 'the dead trunk of the tree which you are trying to move contains the spirit of my wife. Perhaps, if you will allow my little son Chiyodō to help you, it will be more easy for you; and he would like to help in showing his last respects to his mother.'

The woodcutters were fully agreeable, and, much to their astonishment, as Chiyodō came to the back end of the log and pushed it with his little hand, the timber glided easily towards the river, his father singing the while an 'Uta.' There is a well-known song or ballad in the 'Uta' style said to have sprung from this event; it is sung to the present day by men drawing heavy weights or doing hard labour:--

In Wakanoura the labourers sing a working or hauling song, which also is said to have sprung from this story of the 'Yanagi no Sei:--

There are famous places in Wakanoura
First Gongen
Second Tamatsushima
Third, the pine tree with its hanging branches
Fourth comes Shiogama
Is it not good, good, good?

A third 'Uta' sprang from this story, and is often applied to small children helping.

The waggon could not be drawn when it came to the front of Heitaro's house, so his little five-year-old boy Chiyodō was obliged to help, and they sang:--

. sennen bikuni 千年比丘尼 a young nun for 1000 years .
Often she planted a walking stick in the temple compound before leaving, which sprouted to live on . .

Yashima Kameyama 八島亀山
There was also an old tree, byakushin ビャクシン / 柏槙 (a kind of mountain juniper) to our day, which had sprouted from her walking stick.
This tree was then found to have a disease infecting the Japanese pear trees nearby and was cut down eventually.

In Asakuchi 浅口, Okayama
there is another tree that has sprouted from her walking stick. It has sprouted, as she had foretold, "tsue wa ikitsuku made" 杖は活き着くまで. . . and now there is another hamlet with a pun on that nearby :
Tsukuma 津熊 .
The tree that sprouted from her stick was a huge yanagi 大柳 willow tree.
It was so strong and perfect that the tree was cut down and its trunck became a beam for the famous 三十三間堂, 京都 Hall of 1000 Buddha Statues in Kyoto, Sanjusan Gendo.