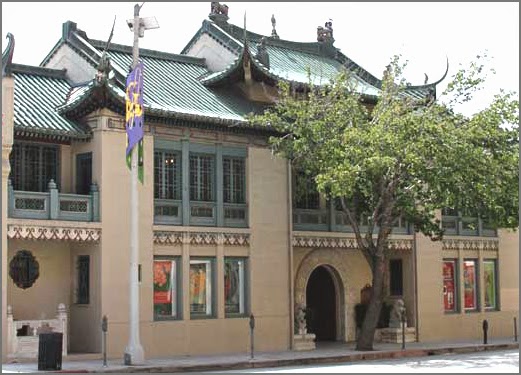 USC PAM, founded in 1971, is located in a 1924 Chinese Qing Dynasty-inspired mansion in downtown Pasadena and has a collection of more than 17,000 items from across Asia and the Pacific Islands, spanning more than 5,000 years.
- source : news.usc.edu/63742
University of Southern California - USC 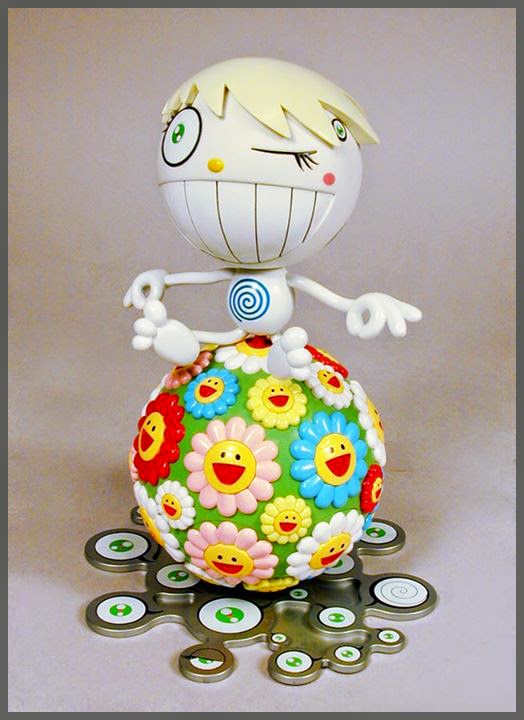 
- quote
Insight: The Path of Bodhidharma
explores the portrayal of the Buddhist monk Bodhidharma (known as Daruma in Japan) and how this religious figure has become a popular icon through an array of objects from paintings and sculptures to decorative objects and toys.

Credited with introducing Chan (Zen in Japanese) Buddhism in China in the 6th century, the Indian monk Bodhidharma has become a well-known subject in Buddhist art, frequently depicted in ways that emphasize his non-East Asian origin and iconoclastic persona. As Chan (Zen) Buddhism gained popularity, various legends associated with the Chan patriarch evolved, and artists began to depict those legends alongside his portraits.

Traditional depictions of Bodhidharma were executed in ink monochrome with free expressive brush strokes, alluding to his teaching that focuses on the spontaneous nature of reaching enlightenment through meditation. During the Edo period (1603-1868) in Japan, the traditional sternness of this pious monk's expression went through a radical change as he was often paired with a courtesan of the pleasure quarters—a parody to expose the hypocrisy of society.

- quote
Mitate-e metaphors in Japanese art
(2013)
snip
One particularly humorous section examines mitate-e, which literally means “look and compare.” This is a category of Japanese art that uses metaphorical images that juxtaposes historical and contemporary events and figures, often fusing the religious with the vulgar, the high with the low, added layers of meanings that could be playful, critical or ironical references enjoyed by the educated classes. 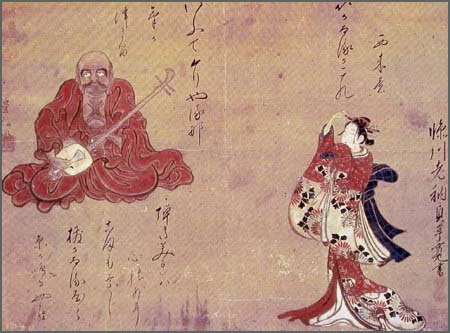 Mitate-e became popular in the Edo period when urban culture blossomed. As the Tokugawa shogunate secured relative peace, the newly established capital Edo (today Tokyo) grew rapidly in population and economic status. The merchant class accumulated wealth but their relatively low social status limited their participation in public affairs. As a result, they looked for outlets in various forms of entertainment, and embraced mitate-e, which allowed the indirect critique of current events and élite culture. The inclusion of witty prose or poems next to images heightened the complex allusions embedded in mitate-e. Text could also nuance or disguise the interpretation, further stimulating the viewer or confusing the authorities who regulated mass-produced images.

Among the most popular subjects in mitate-e are pairings of courtesans with religious figures such as Daruma (Bodhidharma in Chinese), the Indian monk who transmitted Chan (Zen in Japanese) Buddhism to China, as seen at the top of this post. The juxtaposition of this ascetic with a courtesan of the pleasure quarters humorously critiqued religion as well as the culture of the ruling samurai class who boasted of their dedication to Zen. It also underscores the core values of the genre known as ukiyo-e (or ‘pictures of the floating world’), to which this painting belongs. The word ukiyo (‘transitory world’) was derived from Buddhism, referring to the ephemeral nature of this world. By replacing the character for uki 憂き (meaning ‘transitory’) with a homonym 浮meaning ‘floating,’ a profound Buddhist idea was turned upside down to express the attitude of joie de vivre characteristic of the pleasure quarters.

Zen Buddhism teaches that anyone is able to reach enlightenment through simple, banal activities such as chopping wood or taking naps. Here, the courtesan’s knowledge of the ‘floating world’ (ukiyo 浮世) is compared to Daruma’s enlightened realization of the ‘evanescence of the world’ (ukiyo 憂き世). It also suggests that one can find enlightenment, or release, in the carnal activities of the pleasure quarters. Pious Daruma playing the shamisen, a popular musical instrument among courtesans and geisha, further increases the wry humor.

The poem accompanying the image is by Old Priest Rinsen in the Jōkyō era (1684–88).
It reads:

Why have you come from the west?
Don’t ask and cause me to regret it.
In playing the shamisen, the bridges do not count.
The heart alone sings:
Is it the plectrum or the strings
Which makes the music?
(Translation by Kuniko Brown)

The Buddhist art of the Himalayas is essentially symbolic in nature and is rich with esoteric elements. To unlock its mysteries the viewer must use semiotic codes. Since the Himalayan pieces featured in the exhibition are primarily employed in the service of Buddhism, they are religious in nature. Hence, they were produced in large part either by monks who practiced it, or by the artists [who were knowledgeable in Buddhist iconography].

The practitioners, of course, understood the meaning and symbolism but the laypeople did not. Deepak Shimkhada, assistant professor of art and religion at Claremont, McKenna College is an expert in the subject of Himalayan art and will unveil the mysteries of the mudras and mandalas as seen in the Buddhist art of the Himalayas. 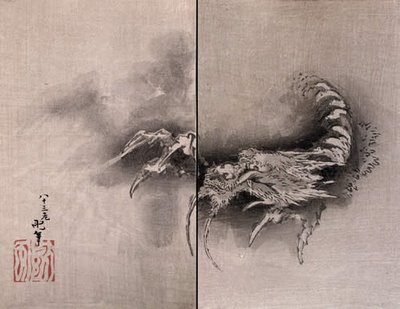 Illustration of a Dragon from the MangaKatsushika Hokusai (1760–1849)
1815
Leaf from a bound book, woodblock print, ink on paper
Pacific Asia Museum Collection
Gift of Evelyn and Eleanor Moles, 1982.27.7

Email ThisBlogThis!Share to TwitterShare to FacebookShare to Pinterest
Labels: Museum