quote
a Japanese textile designer.
In 1956, he was designated as a Living National Treasure for his katazome stencil dyeing technique by the Japanese government. Serizawa visited Okinawa several times and learned the Ryūkyū bingata techniques of dyeing. Serizawa was also a leading member of the mingei movement founded by Yanagi Sōetsu. His folk art includes kimono, paper prints, wall scrolls, folding screens, curtains, fans and calendars.

“The distinguishing trait of Serizawa’s katazome method is the use of the starch mixture to create, not a colored area as is current in direct-dyeing process, but a blank, undyed one that forms a part of the pattern and that can later be colored by hand in multi-color or monochrome as the designer sees fit.”
source : wikipedia

Keisuke Serizawa produced kataezome calendar folios starting with calendar year 1946. The 1946 calendar is shown in the catalogue for the 2001 exhibition of Serizawa's work held in Scotland. 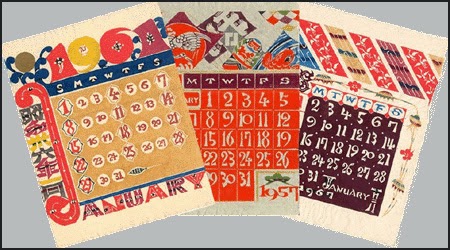 These calendar sets (one page for each month) are stenciled on handmade untrimmed Japanese mulberry paper. The page size is generally 28.6 x 37.2 cm - 11 1/4 x 14 1/2 in. They usually contained in a mulberry paper sack or thick cardboard (also mulberry paper) folding case. On the front of the sack or folding case is pasted on a illustrated stenciled label with the year of the calendar. These labels are rectangular. In addition to illustrations, they contain the year and the word "Calendar" (spelled correctly).

I believe that K. Serizawa calendars can be distinguished from other similar calendar folios by Japanese characters within a hexagonal design found on the label on the sack or folding case (see "Serizawa Marks" below). However, the absence of such a mark does not mean a calendar folio was not produced by Serizawa. In some instances it is possible to attribute a calendar folio to Serizawa by notes on the sack or folding case or through inserts placed loose inside the folio. I have not identified the Serizawa mark on any individual calendar.


with more calendar samples from 1952 until 1979.
and a long list of further information, books about Serizawa etc.

Issued with card slip case but no dust jacket. The work covers all facets of his work including scrolls, wall hangings, folding screens, hanging pictures, kimono, obi, kimono cloth, noren and examples of stencil paper used to dye works. The book reads Japanese style from front to rear. The plates and photograph of Serizawa are followed by 16 pages of Japanese text which includes an image by image descriptive caption for the 92 items. This is followed by a Japanese language colophon. 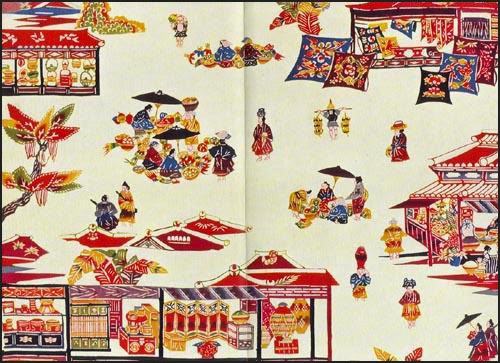 The color plates are tipped in and are produced utilizing the color halftone process. The black and white plates are produced by the halftone process also. Some pages have more than one image per page and some images span two pages. Each image is assigned a number and has a descriptive caption in Japanese. The front of the book has an English language title page and a two page discussion of Serizawa and his work. This is followed by a five page "Listing of Plates" with the number of each image and an English descriptive caption. The book appears to be the first in a set but I have not been able to confirm subsequent volumes were published. Several of the images relate to Okinawa.
- source : baxleystamps.com/litho/serizawa_1967 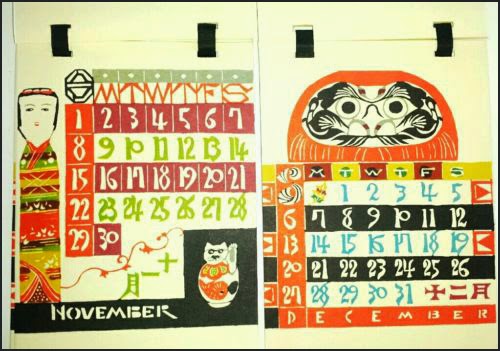 A collection of about 800 works of the late Keisuke Serizawa, an international dye artist. Various works, such as kimono clothes, obi belts, bed-clothes, tapestries, screens, book covers, curtains created by his stencil dyeing method, as well as hand-made picture books and glass pictures. Serizawa's collection of about 4,500 ethnic crafts from all over the world is also exhibited replacing three times a year (the special exhibition's term may vary).
- source : www.shizuoka-guide.com 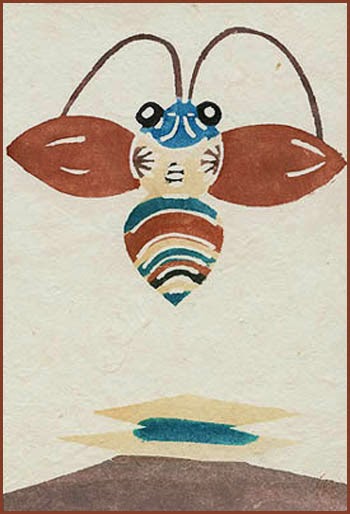 - - - Paper Making
Keisuke Serizawa's "Paper Making" is a fine example of his 'Mingei'. 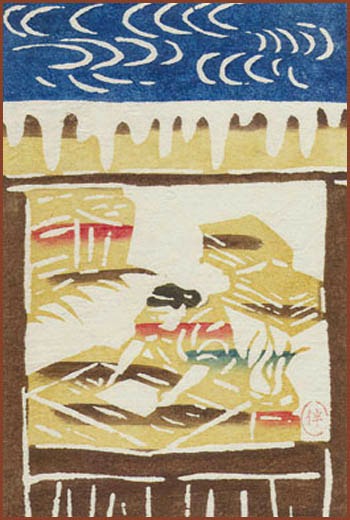 This original hand-stenciled dye print is printed upon Japanese hand-made mulberry (rice) paper and with full margins as published by the Keisuke Serizawa workshop around 1970. This impression of Paper Making is signed with Keisuke Serizawa 's chopmark signature in the lower right corner.
Keisuke Serizawa became a leading Japanese artist of 'Mingei' -- which in Japanese generally means folk art. The Keisuke Serizawa Art & Craft Museum now contains over two hundred examples of this artist's fabric patterns and wall hangings and about one thousand examples of his paper dyeing workshop productions. 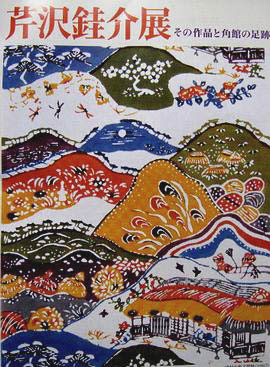