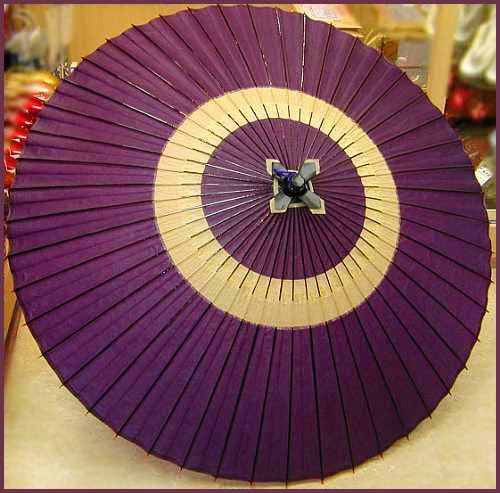 . ja no me gasa, janomegasa 蛇の目傘 umbrella with the eye of a snake . 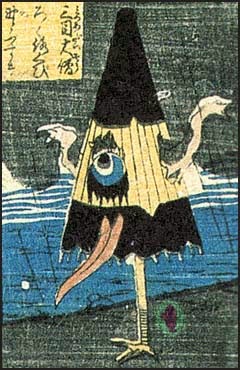 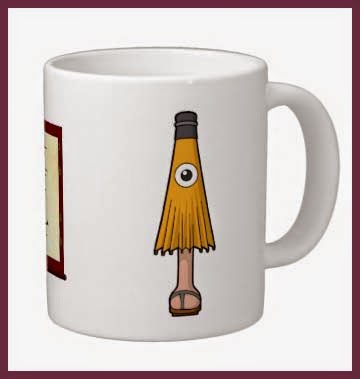 quote
Wagasa – the traditional Japanese umbrella
..... Actually, wagasa is so popular in the Japanese tradition that it has its own… spirit. This is Tsukumogami, a kind of Japanese spirit said to appear from an object after 100 years, when… it becomes alive.
The spirit of wagasa is called Karakasa Obake, umbrella ghost, a monster looking like a folded wagasa, with a single eye and a single foot wearing a geta.
source : carolinescornerblog.wordpress.com 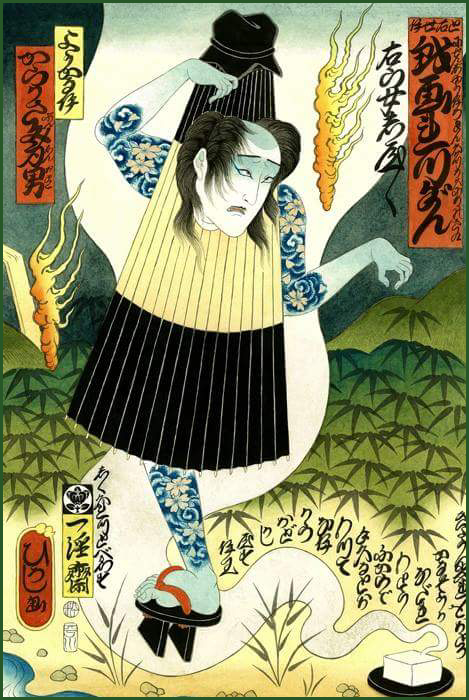 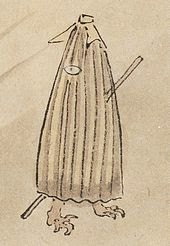 They are generally umbrellas with one eye and jump around with one leg, but sometimes they have two arms or two eyes among other features, and they also sometimes depicted to have a long tongue. Sometimes, but rarely, they even have two feet, as depicted in the yōkai emaki such the "Hyakki Yagyo Zumaki."

In the Hyakki Yagyo Emaki from the Muromachi period, yōkai that appeared as umbrellas could be seen, but in this emaki, it was a humanoid yokai that that merely had an umbrella on its head, and thus had a different appearance than that resembling a kasa-obake. The kasa-obake that took on an appearance with one eye and one foot was seen from the Edo period and onwards, and in the Obake karuta made from the Edo period to the Taishō period, kasa-obake with one foot could often be seen.

In the yōkai sugoroku "Mukashi-banashi Yōkai Sugoroku (百種怪談妖物双六)" the Ansei era, a kasa-obake was depicted under the name "One-footed from Sagizaka (鷺坂の一本足 Sagazaka no Ippon Ashi)." Among the many non-living or still object yōkai depicted in the "Hyakki Yagyo Emaki," only the umbrella yōkai can be seen to have remain well-known even after the Edo period, and it is said to be the most well-known yōkai of an object.

They frequently appear in legends and caricatures, and as opposed to how they are a yōkai that is unusually well-known, they do not appear in any eye-witness stories in folklore at all, and it is not clear what kind of yōkai they are. Literature about them are not accompanied by folktales, and thus they are considered to be a yōkai that appear only in made-up stories or exist only in pictures. After the war, there was also the interpretation that they were an existence that was on the same level as manga characters. One possibility that has been thought of is that when Hyakumonogatari Kaidankai became popular in the Edo period, the story-tellers were requested to tell new stories and about yōkai that is not yet known throughout society, and thus they were a yōkai created by individuals.

For tools used in human life, there was the way of thought that, as months and years pass by and these tools become older, they have an ability to become apparitions. These are called tsukumogami, and some literature consider this yōkai to be one example of them, but it has not been confirmed that there are any classical literature or classical essays that verifies this.

After the war, they became a representative character for depictions of obake and haunted houses, and are frequently used as characters anime, manga, and movies that have a theme on yōkai, and are also generally doodled by children. 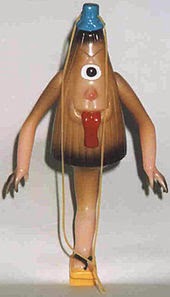 
- Similar stories
These are not kasa-obake, but in folktales, as an umbrella yōkai, in the Higashiuwa region, Ehime Prefecture, there is a story that a rain umbrella would appear in valleys on rainy nights, and those who see it would cower and not be able to move their feet. Also, in Mizokuchi, Tottori Prefecture (now Hōki, Saihaku District), there is a yōkai called yūreigasa (幽霊傘, "ghost umbrella") that has one eye and one foot like the kasa-obake, but it is said that on days of strong wind, they would blow people up into the skies.
- - - More in the WIKIPEDIA ! 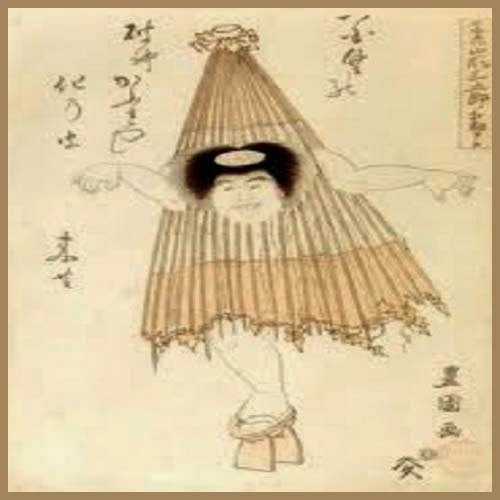 - quote
Japan’s Kasa Obake:
Let a Monstrous Smile Be Your Umbrella
Few human tools exemplify the concept of “planned obsolescence” (the industrial policy of designing products to stop functioning for a certain period of time, putting consumers under pressure to purchase more) than the humble umbrella. If you’ve ever owned an umbrella that’s lasted longer than a year, you’re probably agoraphobic, and purchased it in a fit of irrational exuberance about the prospect of finally making it outside. The essential and mutually exclusive qualities one generally looks for in an umbrella (excluding fancy English gentlemen and people expecting the spontaneous breakout of a musical) are compactness, as you eventually get tired of carrying it around when the sun finally comes out, and maximum coverage, since the significant motivator behind the whole exercise is to stay dry.

Lucky for us, Japan exists to solve this existential problem. Dating back to 10th Century A.D. Japanese folklore are the Yōka 妖怪  (in Kanji, consists of the characters for “otherworldly” and “weird”) called Tsukumogami, sometimes referred to as spirits, monsters, or demons, but sharing the characteristic of being an ordinary household object that has existed for more than 100 years, and subsequently achieved animated status (as in, has become alive and self-aware, rather than featured in the latest manga, although this also happens to be the case).

One of the most frequently mentioned and popularly marketed Tsukumogami is the Kasa obake (that is, the “umbrella obake” – obake literally meaning “a thing that changes”, also called variously by the names karakasa obake or karakasa kozo). Apparently, were an umbrella ever to reach the century mark, which appears to have happened so often in Japan in the past thousand years that it merited its own monster, said umbrella comes alive as an umbrella shaped creature with one eye, one foot with a traditional Japanese wooden clog, and a long, protruding tongue.

According to a text entitled Tsukumogami ki 付喪神記 (Record of tool specters) dated to the Muromachi period (1336–1573), after a span of one hundred years utsuwamono or kibutsu 器物 (containers, tools, and instruments) receive souls, and, like all things with individual souls, develop independent spirits and thus became prone to tricking people. These spirits are called tsukumogami. Resentful after having been abandoned by the human masters whom they so loyally served, the tools and utensils in Tsukumogami ki become vengeful and murderous specters. With imperial and Buddhist support, however, the wayward spirits learn to repent their malevolent ways, enter lives of religious service, and, in the end, attain Buddhahood through the Shingon sect of Esoteric Buddhism. The text emphasizes that the Shingon teachings enable even such nonsentient beings as tools and containers to attain enlightenment (Reider, 2009, p232)

So not only does the umbrella come alive, but it’s pissed, and it’ getting together with its similarly unhappy household object friends, and coming after you. Of course, some Tsukumogami are relatively less evil than others, and it is said that the Kasa Obake tends more towards the pranking and scaring humans side of things than the homicidal inclinations of say, the Ittan-momen, a 100 year old roll of cotton that flies about looking for unsuspecting humans to attack and smother. Kasa Obake are even rumored to enjoy playing with small children. Sadly, modern implements are not susceptible to becoming Tsukumogami, as Tsukumogami abhor electricity, and in addition, when was the last time you owned anything that lasted a hundred years? If I had kept the rain off someone’s head for a century, and wound up in the trash, I might feel a little miffed as well, much like the hostile products described in the ancient folktales related in the 10th Century Japanese scrolls, “The Record of the Tool Specters”.

Around the era of Kōhō 康保 (964–967) perhaps, according to the usual custom of Sweeping Soot, old tools were thrown away from houses both inside the capital and in the surrounding area. Those abandoned instruments got together to discuss their fate: “We have faithfully served the houses as furniture and utensils for a long time. Instead of getting the reward that is our due, we are abandoned in the alleys to be kicked by oxen and horses. Insult has been added to injury, and this is the greatest insult of all! Whatever it takes, we should become specters and exact vengeance.”

In the middle of these heated discussions, a Buddhist rosary named Ichiren Novice (Ichiren nyūdō 一連入道) cut into the debate: “Everyone, it must be our karma to be discarded like this. We should return hostility with benevolence.” Hearing the Novice, a club named Rough John (Aratarō 荒太郎) became angry and yelled, “You meddling Novice! Generally speaking, it is halfbaked Buddhist priests that people can’t stand to look at. Go away!” Aratarō then beat Ichiren so badly that the Novice’s rosary knot was nearly severed. Ichiren Novice was near to death, and only by the help of his disciples did he escape (Tsukumogami ki付喪神記 “The Record of Tool Specters”, 14th Century) 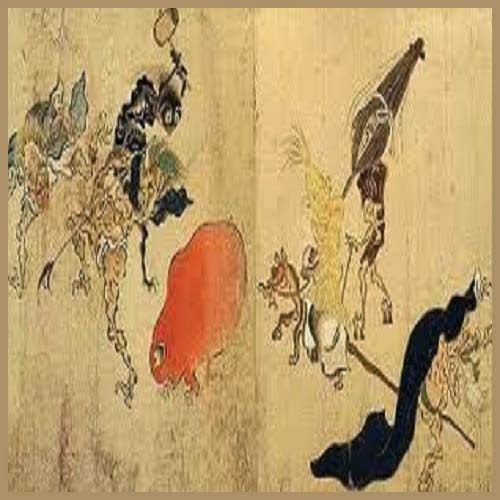 Luckily, just as humans can attain enlightenment, the Tsukumogami can overcome their anger and get in touch with their Buddha nature, an object lesson, so to speak, to us biological organisms. When an umbrella is no longer an umbrella, it no doubt causes an element of cognitive dissonance in the unfortunate tool. As author Paul Auster said, “A language that will at last say what we have to say. For our words no longer correspond to the world. When things were whole, we felt confident that our words could express them. But little by little these things have broken apart, shattered, collapsed into chaos. And yet our words have remained the same. Hence, every time we try to speak of what we see, we speak falsely, distorting the very thing we are trying to represent…Consider a word that refers to a thing- “umbrella”, for example…Not only is an umbrella a thing, it is a thing that performs a function…What happens when a thing no longer performs its function? The umbrella ceases to be an umbrella. It has changed into something else. The word, however, has remained the same. Therefore it can no longer express the thing.”

So what is an umbrella to do?
Obviously, it dons a hat, a sandal (for its one foot), and proceeds to prank humans, which is no doubt preferable to the search for human flesh to eat that is often characteristic of other Tsukumogami. And if you are really lucky, your umbrella will spend a lot of time meditating in an attempt to achieve enlightenment. This is an excellent teaching moment for your children. Treat your toys with respect, for if you don’t, a hundred years from now they might come looking to devour you. Perhaps this fear motivates our never-ending quest for ever more disposable products. Who wants to spend their lives watching their backs because they thoughtlessly discarded a comb in 1986?

Of course, it may just be that our modern treatment of objects reflects our modern treatment of people, and the resultant creation of our social monsters. As public relations luminary Kelly Cutrone observed in Normal Gets You Nowhere, “In today’s disposable culture, we throw away people like we do razors, always assuming there’s someone better out there to hang out with, or to work for–people who will never embarrass us, let us down or offend us.” Word to the wise concerning Tsukumogami—if you have to discard an inanimate object, it probably shouldn’t be a razor. 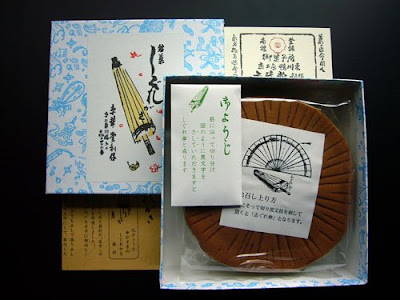 Email ThisBlogThis!Share to TwitterShare to FacebookShare to Pinterest
Labels: mingei