of Batsford Park, Gloucestershire, and Birdhope Craig, Northumberland, was a British diplomat, collector and writer. Nicknamed "Barty", he was the paternal grandfather of the Mitford sisters. 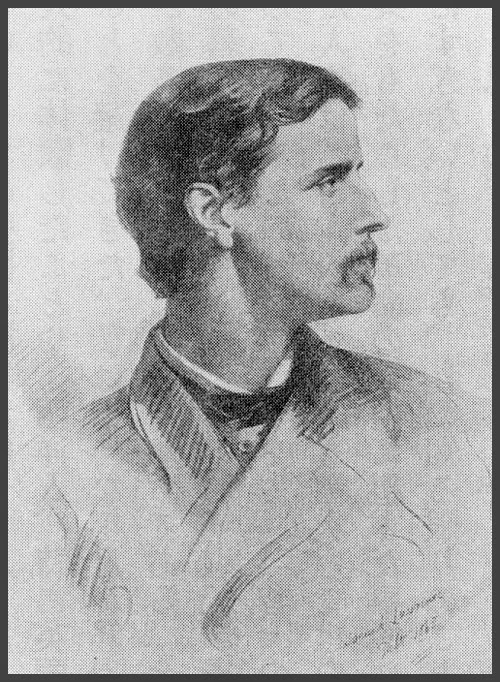 quote
... Entering the Foreign Office in 1858, Mitford was appointed Third Secretary of the British Embassy in St Petersburg. After service in the Diplomatic Corps in Peking, he went to Japan as second secretary to the British Legation at the time of the exciting but difficult Meiji Restoration. There he met Ernest Satow and wrote Tales of Old Japan (1871), a book credited with making such classical Japanese tales as "The Forty-seven Ronin" first known to a wide Western public. He resigned from the diplomatic service in 1873.

Following the 1902 Anglo-Japanese Alliance, in 1906 he accompanied Prince Arthur on a visit to Japan to present the Emperor Meiji with the Order of the Garter. He was asked by courtiers there about Japanese ceremonies that had disappeared since 1868. He is one of the people credited with introducing Japanese knotweed to England.

... According to W. S. Gilbert, Mitford served as a consultant on Japanese culture to Gilbert and Arthur Sullivan during the development of their 1885 Savoy Opera The Mikado. A traditional Japanese song hummed by Mitford to Gilbert and Sullivan during a rehearsal was used in the opera for the march accompanying the Mikado's entrance.

... During his time in Japan he was said to have fathered two children with a geisha. Later he was considered to be one of the possible fathers of Clementine Hozier (1885–1977), in the course of an affair with his wife's sister Blanche. Clementine married Winston Churchill in 1908.
source : wikipedia 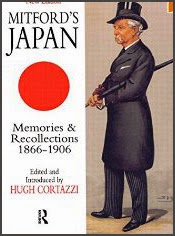 As the preface to this new edition points out,
Mitford (Algernon Bertram, the first Lord Redesdale) was a gifted writer whose descriptions of Japan, during the critical time of transition from a feudal to a modern state in the late nineteenth century, are a testimony to his narrative skills, accuracy and objective reporting - qualities which are sometimes overshadowed by the higher profile given to his contemporary Ernest Satow. Accordingly, this new paperback edition, which makes the Mitford memoirs available to a much wider audience, includes a wide selection of extracts from Mitford's bestselling Tales of Old Japan (1871) - what Mitford, according to Carmen Blacker, perceived as the essence of the Japanese spirit: 'heroic, ruthless, devotedly loyal, bloody and chivalrous'.
- source : books.google.co.jp 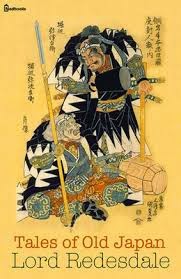 Tales of Old Japan (1871)
is an anthology of short stories compiled by Algernon Bertram Freeman-Mitford, Lord Redesdale, writing under the better known name of A.B. Mitford. These stories focus on various aspects of Japanese life before the Meiji Restoration. The book, which was written in 1871, forms an introduction to Japanese literature and culture, both through the stories, all adapted from Japanese sources, and Mitford's supplementary notes. Also included are Mitford's eyewitness accounts of a selection of Japanese rituals, ranging from harakiri (seppuku) and marriage to a selection of sermons.

For many years, the version of events retold by A. B. Mitford in Tales of Old Japan (1871) was considered authoritative. The sequence of events and the characters in this narrative were presented to a wide popular readership in the West. Mitford invited his readers to construe his story of the Forty-seven Ronin as historically accurate; and while his version of the tale has long been considered a standard work, some of its precise details are now questioned. Nevertheless, even with plausible defects, Mitford's work remains a conventional starting point for further study.

Whether as a mere literary device or as a claim for ethnographic veracity, Mitford explains:

In the midst of a nest of venerable trees in Takanawa, a suburb of Yedo, is hidden Sengakuji, or the Spring-hill Temple, renowned throughout the length and breadth of the land for its cemetery, which contains the graves of the Forty-seven Rônin, famous in Japanese history, heroes of Japanese drama, the tale of whose deed I am about to transcribe.
— Mitford, A. B.

Mitford appended what he explained were translations of Sengakuji documents the author had examined personally. These were proffered as "proofs" authenticating the factual basis of his story. These documents were:

...the receipt given by the retainers of Kira Kôtsuké no Suké's son in return for the head of their lord's father, which the priests restored to the family.
...a document explanatory of their conduct, a copy of which was found on the person of each of the forty-seven men, dated in the 15th year of Genroku, 12th month.
...a paper which the Forty-seven Rǒnin laid upon the tomb of their master, together with the head of Kira Kôtsuké no Suké.

(See Tales of Old Japan for the widely known, yet significantly fictional narrative.)
- - - More in the WIKIPEDIA ! 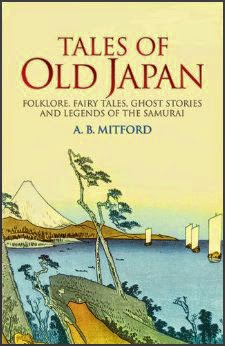 - 1910 - PREFACE
In the Introduction to the story of the Forty-seven Rônins, I have said almost as much as is needful by way of preface to my stories.

Those of my readers who are most capable of pointing out the many shortcomings and faults of my work, will also be the most indulgent towards me; for any one who has been in Japan, and studied Japanese, knows the great difficulties by which the learner is beset.

For the illustrations, at least, I feel that I need make no apology. Drawn, in the first instance, by one Ôdaké, an artist in my employ, they were cut on wood by a famous wood-engraver at Yedo, and are therefore genuine specimens of Japanese art. Messrs. Dalziel, on examining the wood blocks, pointed out to me, as an interesting fact, that the lines are cut with the grain of the wood, after the manner of Albert Dürer and some of the old German masters,—a process which has been abandoned by modern European wood-engravers.

It will be noticed that very little allusion is made in these Tales to the Emperor and his Court. Although I searched diligently, I was able to find no story in which they played a conspicuous part.

Another class to which no allusion is made is that of the Gôshi. The Gôshi are a kind of yeomen, or bonnet-lairds, as they would be called over the border, living on their own land, and owning no allegiance to any feudal lord. Their rank is inferior to that of the Samurai, or men of the military class, between whom and the peasantry they hold a middle place. Like the Samurai, they wear two swords, and are in many cases prosperous and wealthy men claiming a descent more ancient than that of many of the feudal Princes. A large number of them are enrolled among the Emperor's body-guard; and these have played a conspicuous part in the recent political changes in Japan, as the most conservative and anti-foreign element in the nation.

With these exceptions, I think that all classes are fairly represented in my stories.

The feudal system has passed away like a dissolving view before the eyes of those who have lived in Japan during the last few years. But when they arrived there it was in full force, and there is not an incident narrated in the following pages, however strange it may appear to Europeans, for the possibility and probability of which those most competent to judge will not vouch. Nor, as many a recent event can prove, have heroism, chivalry, and devotion gone out of the land altogether. We may deplore and inveigh against the Yamato Damashi, or Spirit of Old Japan, which still breathes in the soul of the Samurai, but we cannot withhold our admiration from the self-sacrifices which men will still make for the love of their country.

The first two of the Tales have already appeared in the Fortnightly Review, and two of the Sermons, with a portion of the Appendix on the subject of the Hara-Kiri, in the pages of the Cornhill Magazine. I have to thank the editors of those periodicals for permission to reprint them here.
- LONDON, January 7, 1871. 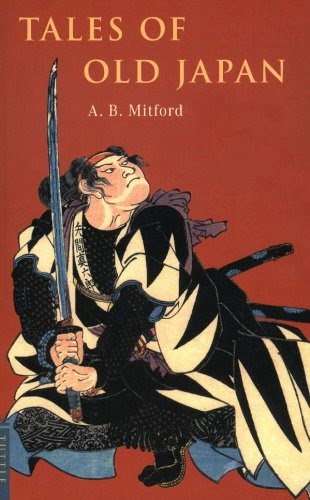 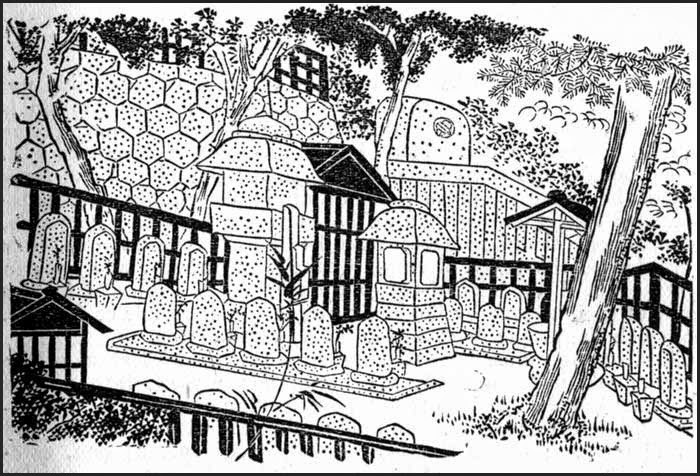 THE TOMBS OF THE RÔNINS.


. THE LOVES OF GOMPACHI AND KOMURASAKI .
and more about Meguro Fudo and the Yoshiwara 吉原 pleasure quarters in Edo 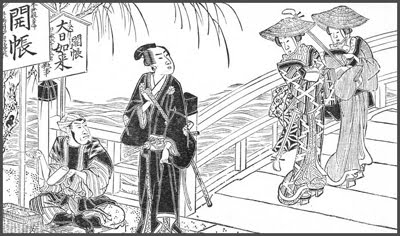 . THE ETA MAIDEN AND THE HATAMOTO . 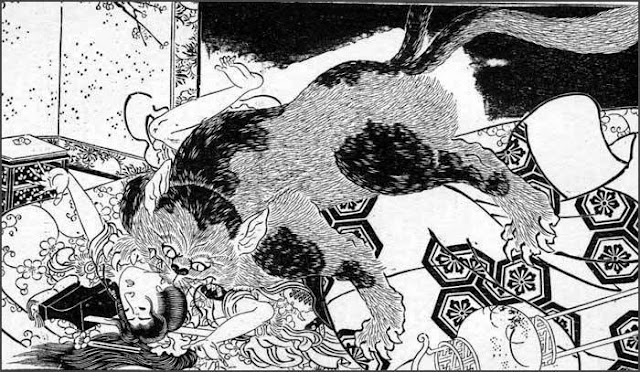