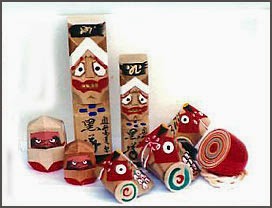 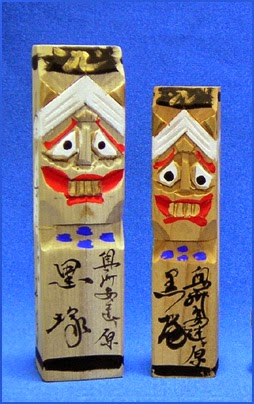 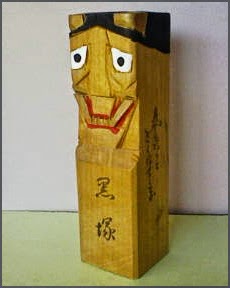 
quote
Kurozuka
TRANSLATION: the black mounds; named for the area she haunted

LEGENDS: Kurozuka is the most well-known demon woman in Japanese folklore, and a very popular subject in the arts, starring in everything from paintings to ukiyoe prints to noh plays. She has gone by many names. Kurozuka, or the witch of “the black mounds,” is the most famous one, but she is also known as the
Demon of Adachigahara, or even just simply Onibaba, “the demon hag.” 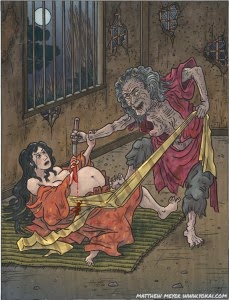 Her story has changed over the years and through various adaptations.
A popular version of the story goes like this:

Long ago, a wealthy noble couple had a daughter whom they loved very much. However, their daughter was sickly, and by the age of five she had still never spoken a single word. The worried couple consulted with priests and doctors, until finally one doctor told them that the only way to cure their daughter was to feed her a fresh liver from an unborn fetus.

The couple summoned their daughter’s nanny and put the task of retrieving the liver to her. Expecting that it would take some time to find someone willing to give up their baby’s liver, the nanny prepared for a long journey. She gave the daughter a protection charm and promised not to return without the liver, then left.

The nanny traveled for days, months, and eventually years without finding any family willing to give up their baby’s life. Eventually, her travels brought her to the moors of Adachigahara, in Fukushima. Despondent, she decided that if nobody would give her a liver, she would have to take one. She made camp in a cave off of the road and decided to wait for a pregnant woman to pass by.

Many more years passed, and finally a lone pregnant woman came walking by on the road. The nanny leaped out of the cave and slew the traveler with her knife, carving her belly open, killing the fetus, and taking its fresh liver. Only after the deed was done, the nanny looked down at her victim, and noticed the young woman was wearing a very old but very familiar protection charm: the very same one that she had given the daughter so many years ago! The knowledge of what she had done weighed so heavily on her that the nanny went insane, and transformed into a yokai.

The demon of Adachigahara developed fearsome magical powers. She learned to lure travelers into her shelter and invite them to spend the night, after which she would murder them in their sleep. She remained there on the moors of Adachigahara for many many years, murdering any lone travelers who passed by her cave and eating their remains.

In the noh version of her story, the demon woman is eventually visited by traveling Buddhist priests, whom she plans to kill. While she is out gathering firewood, the priests find a room full of dead bodies and bones, and they recognize her as the Demon of Adachigahara. She chases after them, but they are able to hold her back with their Buddhist prayers, and drive the evil spirit from her, banishing it forever. When the demon spirit is driven from her body, she becomes an old woman and dies. The monks bury her remains and build a grave among the black mounds where she haunted.
source : yokai.com/kurozuka

- quote -
The tales of Onibaba the Demon Hag are numerous and bloody. Her myths are centered around primal fears of pregnancy, menopause, and desperation.

Be warned, this post contains tales of fetal murder and cannibalism, as well as images of nudity.

Onibaba’s most famous story begins with a merchant family and a midwife. Shortly after giving birth to a daughter, the merchant family grows despondent to discover their daughter is rather sickly. They seek out a priest to heal her, and the priest informs them that the only cure for her illness is to consume the healthy liver of a newborn child.

In a classic tale of short-sightedness and desperate selfishness, the merchant family tasks the midwife with finding the liver. Never mind where it will come from, or that should it have been another person’s infant, they wouldn’t have given up their daughter’s liver to save another babe.

The midwife, however, does seem to understand that this will be a long and somewhat fruitless venture, and leaves the daughter with a protective charm, asking the gods to protect her while she waits for the liver.

It is no surprise to anyone, of course, that the midwife can not find a single family willing to sacrifice their child’s liver for her charge, and many years pass, her efforts unrewarded. 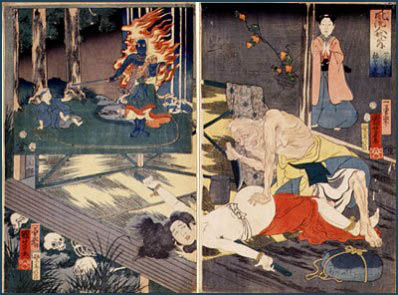 It happens that during a storm one night, the midwife, distressed and frantic for her poor charge, decides that she must change her tactics. She lies in wait on the side of the road with cooking knife, determined to take the liver she needs at the next opportunity.

A pregnant woman rounds the corner.
Diving out from the bushes, the midwife grabs and binds the pregnant woman, slicing open her belly and making short work of the child within. The liver finally in bloody hand, the midwife screams in tortured relief, but a glint on the woman stills her: a charm.
The same protective charm she had given to that baby girl all those years ago.

Her charge.
Horrified in this gruesome discovery, the midwife rips her own robes, the depths of her despair calling forth demons that soon possess her. She eats the liver she had stolen for and from her charge, and becomes a full-fledged yokai.
She escapes to the mountains, becoming feral and grotesque, though the curse of the yokai always brings her back to the roadsides, to find more infant livers.
- more photos -
The tales of Onibaba are more numerous, of course, but it is easy to see why this one terrifies the most. While many horror tales focusing on pregnant women deal with the “monster growing within,” the stories of Onibaba tend to lend themselves to the deadly jealousy of the Crone, too old to bare, too old to be sexually attractive to men, and in the confines of traditional womanhood, therefore, being cast out as worthless. The idea of the old woman becoming a demon at the age when a regular female would be going through menopause is interesting, and purely my own conjecture: in many images, Onibaba is portrayed as being bare-chested, a sight that would normally arouse feelings of attraction. Yet Onibaba is so hideous that the only emotion available is horror and rejection. These reactions come from nothing other than her portrayed age; wrinkled skin and sagging breasts, loose jowls and irregular teeth are the natural progression of age, and can be beautiful, but are rarely shown as such. 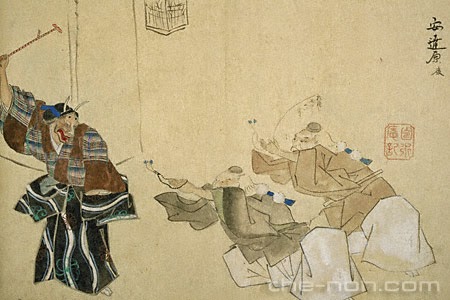 Ajari (a senior-ranking Buddhist monk) Yūkei, who practices ascetic disciplines at Tōkōbō in Nachi, in the province of Kii (present-day Wakayama Prefecture), travels through the provinces for Buddhist training with mountain priests and his followers. One day, the group reaches a far northern province. When they arrive at Adachigahara (the foot of Mount Adatara in current Fukushima Prefecture), the sun has set. They visit a shabby house, which is the only one in the area. A woman, who seems significantly aged, lives in the house. Although Yūkei asks her for one night’s lodging for himself and the others, she declines his request, as it would be too embarrassing to have them stay in such a shabby place. The group has nowhere else to go, however, so he implores her for help until she finally accepts the request.

In the house Yūkei finds something unfamiliar and he asks the woman what it is. She answers that it is a spinning wheel for spinning thread, which is a work for someone ignoble as her. While showing how to use the wheel responding Yūkei’s request, the woman laments her misfortune that she cannot free herself from her bitter karma in this uncertain world and feelingly describes the evanescence of this world. The night has deepened. The woman announces to Yūkei that she must go out to gather firewood to keep off the cold and makes the party promise that they will not look into her bedroom while she is out.

While waiting for her, one of Yūkei’s followers however cannot restrain himself, and despite of Yūkei’s warning, he peeps into her bedroom. There he finds a number of dead bodies piled up high. She is an ogre, the one who has been rumored to reside at Kurozuka in Adachigahara.

Enraged that her secret has been revealed, the woman transforms herself into the form of an ogre and chases Yūkei’s group, who stumble as they flee. Although she tries to catch and eat them, when Yūkei and the others pray with all their strength, the ogre is completely weakened and vanishes within the night storm.
- source : www.the-noh.com/en

Legend along the old highway