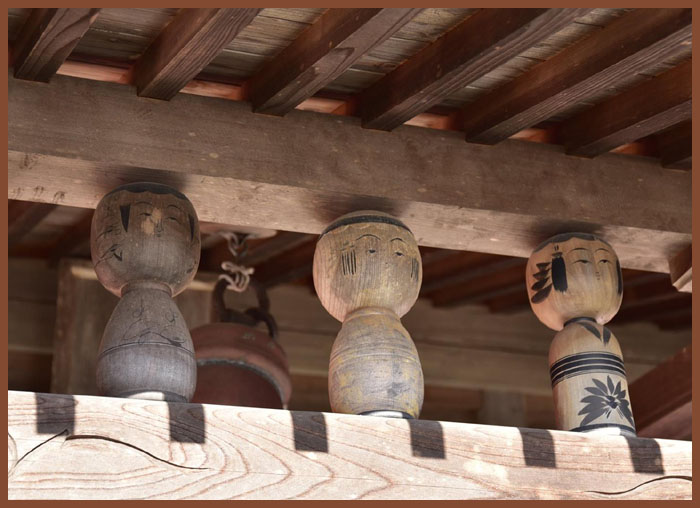 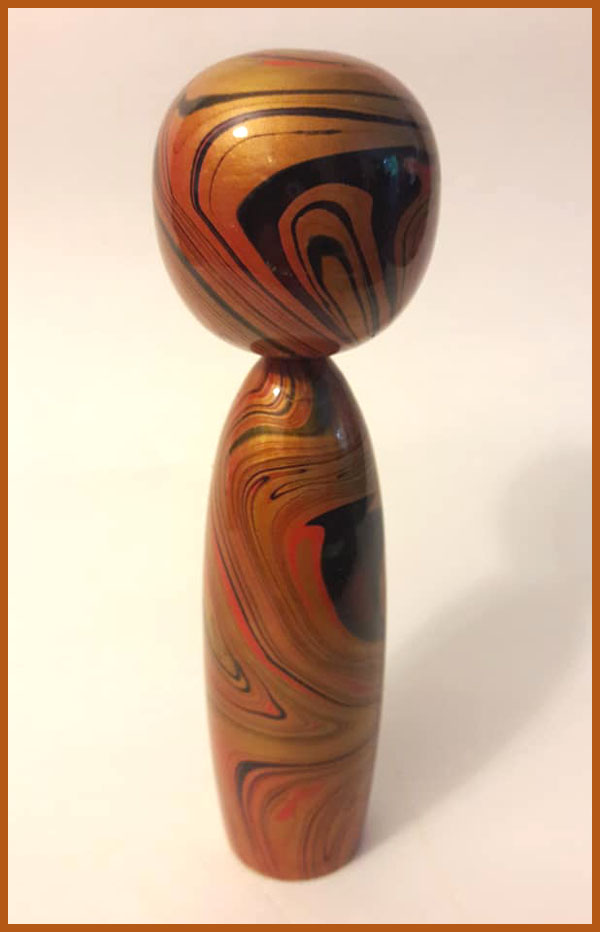 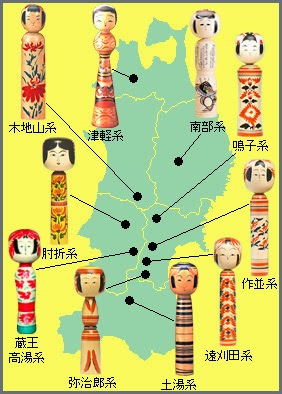 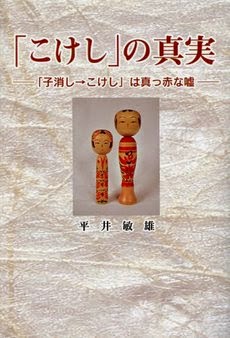 「こけし」の真実‐「子消し→こけし」は真っかな嘘 / 平井敏雄 Hirai Toshio
ko keshi - to wipe out a child - is simply a lie!

The word, ko-keshi (ko o kesu 子を消す), can be loosely translated as "extinguished child" or “a child wiped out.
There is still an ongoing discussion about this naming. 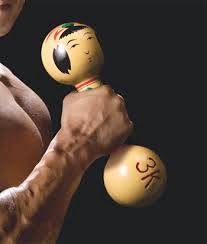 Many people believe that early kokeshi were representations of girl children that were aborted or put to death after childbirth due to the inability to support a poor family of greater size.
It may be that kokeshi were kept as reminders of a dead child's plaything. Kokeshi are also given as charms to childless women in an effort to get pregnant. Kokeshi were kept in the family and passed down from generation to generation.


the yokai monster Medochi メドチ， めどち - a kind of mizuchi (or Kappa)
The medochi use human females to have them bear their children. When the child is born, the Medochi comes to claim his child. If the woman throws the baby into the water to kill it, Medochi takes the bones with him. 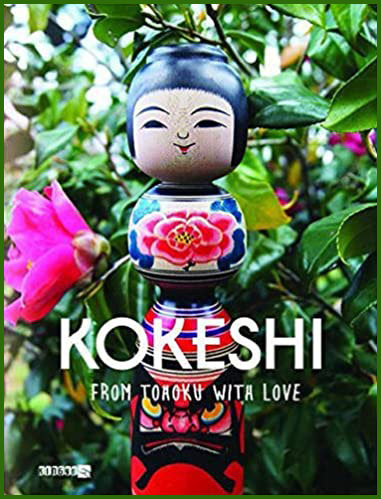 - quote -
Kokeshi, from Tohoku with Love
Manami Okazaki
Kokeshi from Tohoku with Love is the second edition of the best selling book that looks at the craft and culture of kokeshi dolls. Included are more profiles, over 50 more photos and several new chapters. Kokeshi are the traditional dolls that are made of wood and are characterized by their lack of arms or legs. They are produced in the Tohoku region of Japan and were originally a children's toy, although it is more often used as a form of decoration nowadays and displayed in the home. Abroad, they are considered to be an icon of Japan, and reflect Japanese aesthetic sensibilities with their simple, elegant and minimalist designs.
Kokeshi have the appeal of imperfection and hand made exclusivity as no two dolls are the same, each kokeshi embodies the qualities of wood, something that is often referred to as "warmth." In fact, for collectors, more than the freshly made kokeshi, many covet the atmosphere of the vintage kokeshi -- rather than degrading, as with plastic or artificial materials, the wood picks up a dewy, subdued colour and the delicately painted features fade gracefully with time. This book is the only English language book that looks at this culture in depth, and is the only book with English language interviews with the masters of the craft.
The author, Manami Okazaki, visits all 6 prefectures of Tohoku to profile 23 artisans in the remote hot spring villages where they are made. Included are the work and interviews with the masters to the up and coming artists, and highlights many aesthetic theories and sensibilities that are prevalent in contemporary design, even today. The book also looks at Japanese hotspring culture, and Tohoku culture to paint a holistic picture of kokeshi culture. This book will delight fans of wooden crafts, Japanese culture and travellers to Japan. The book gives an insight into the psychology of the craftsman, the process of production, the motifs and the various types, which will inform the collector. This book will also suit travelers to Japan who wish to explore the Northern region of Japan, and their charming hot spring villages. Included are hundreds of photographs.
- source : amazon com - 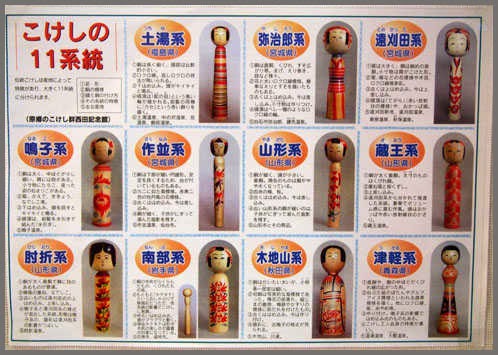 and Kokeshi Lanterns - even with Daruma san 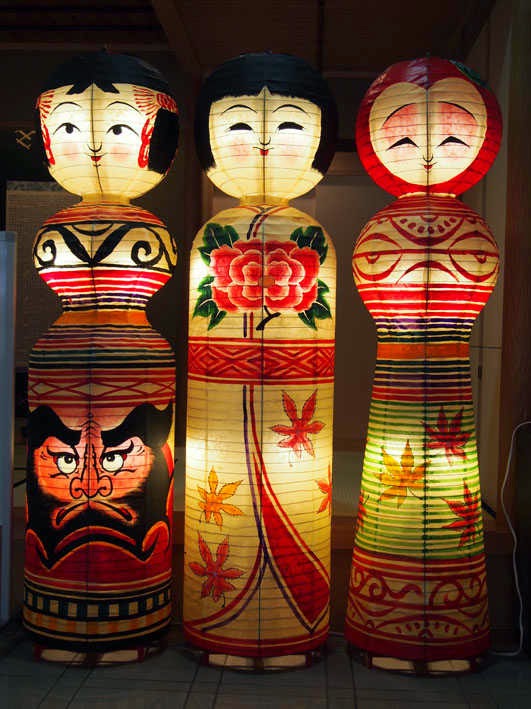 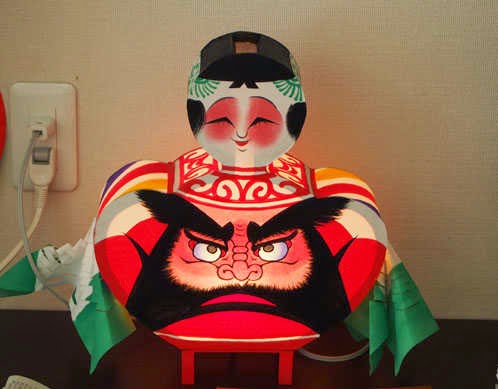 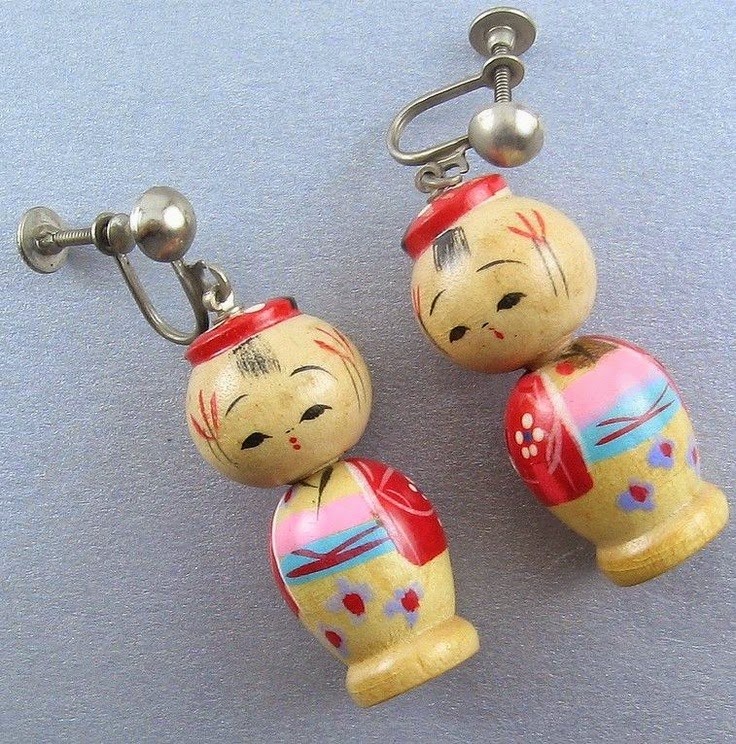 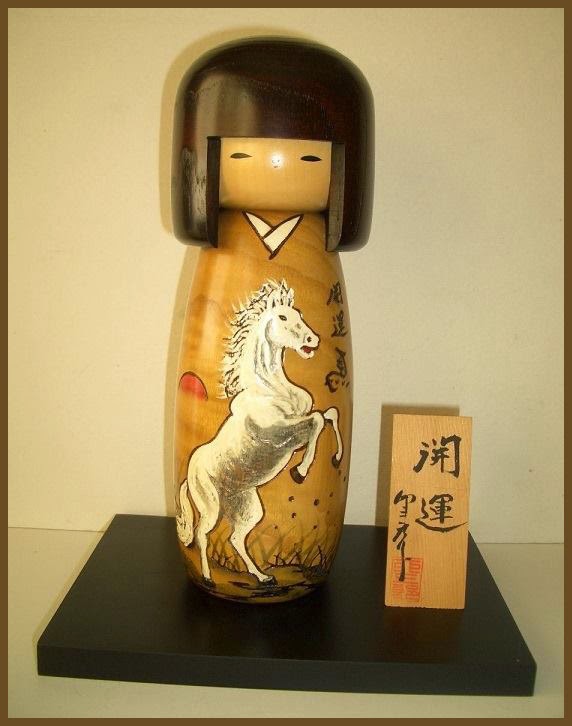 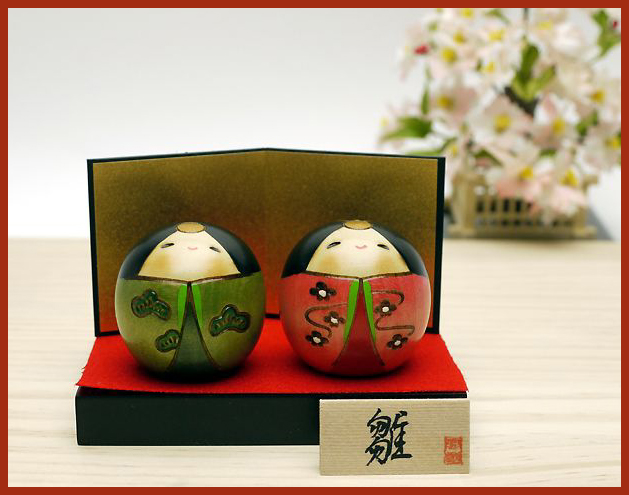 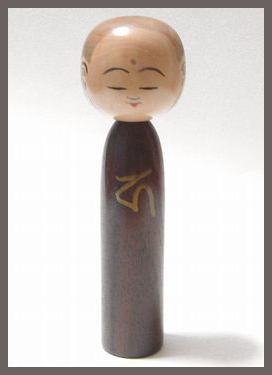 . mangan 満願 a wish has been fulfilled . 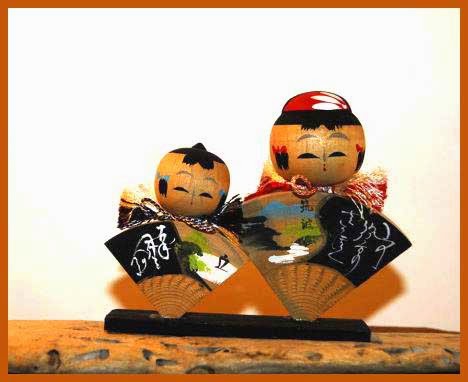 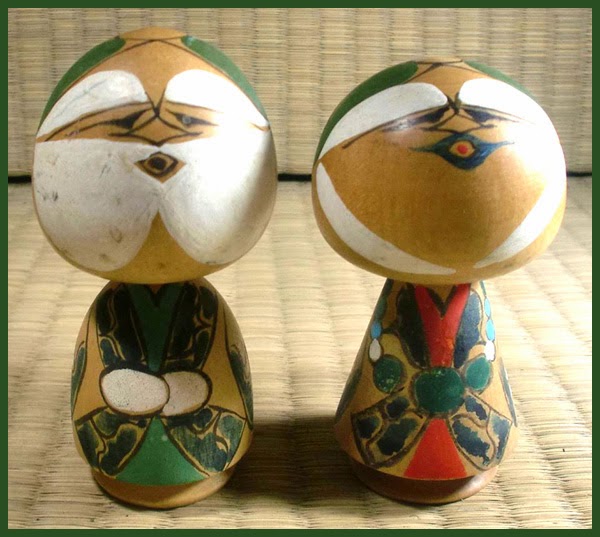 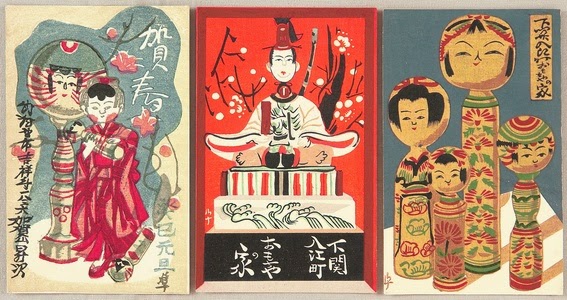 Junichiro Sekino was one of the leading figures of the Sosaku Hanga movement. After World War II he won wide recognition in the USA. In 1963 he taught at the Ohio State University and in 1965 at the Kobe University in Japan.
The style of Junichiro Sekino has a large variety - from realistic to semi-abstract.
- source : www.artelino.com

Once upon a time
there lived three brothers. Their parents were well off and they did not have to help with the daily work and could play around in the woods and the river, even as they got older.

One day their father called them and gave them a lecture and asked them to get out for three years to learn something.
Their mother agreed with this plan and called them, one by one. She asked Taro, the eldest, to become the best leader of the samurai in Japan. Jiro, the second son should become the best merchant of Japan . Next was the turn of Saburo, the third son. But he only mumbled:
"Oh well, I will become the best of something in Japan, for sure!"

The next day the three brothers left home. They walked for a while together until the road foked into three and they had to separate. Taro took the middle road, Jiro went to the right and Saburo turned left. They promised to meet here again after three years.

When they reached home, their father was very happy with the fortune of Taro and Jiro.
Then he turned to Saburo, who said:
"I became the best thief of Japan". 俺は、日本一の泥棒になった。

Father said this was not a joking matter and got angry, but Saburo said he had stolen the precious metal incense burner of his father from the storehouse in the compound.
Father got really angry now, threw Saburo out of the gate and locked it most carefully. 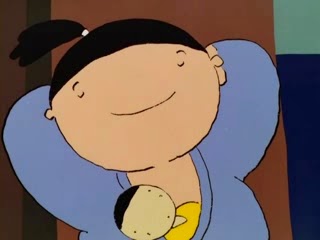 To tell the truth, Saburo has just been lying about becoming a thief.
He had stayed with an old grandmother in the mountains and helped her. And the grateful grandma had given him a magic kokeshi 木ぼっこ（こけし人形） as a present when he departed.
Coming home he threw this doll into the compound of his father, where it went straight to the storehouse, took the metal incense burner and handed it to Saburo.

After that was cleared, the three brothers lived and prospered together.
The kokeshi of Saburo became the special treasure of the family and was kept really well to our day. 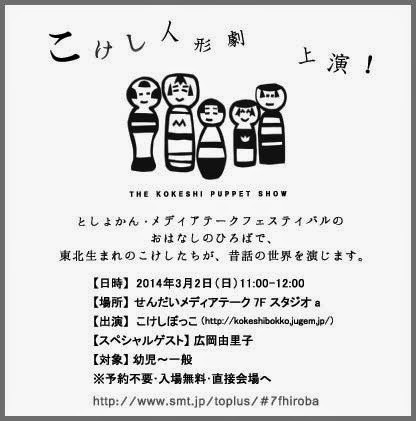 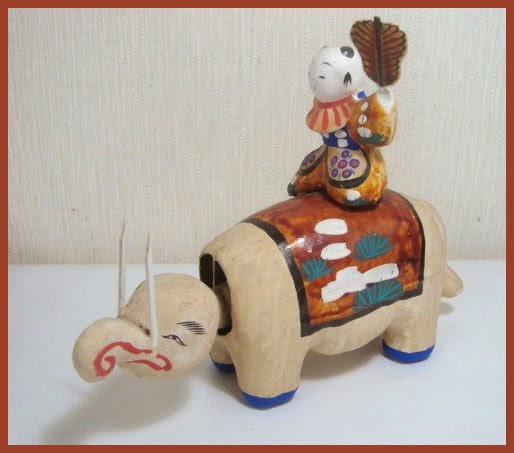 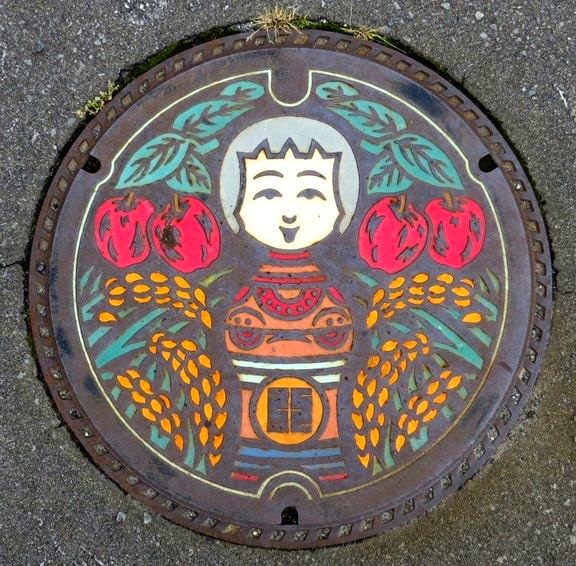 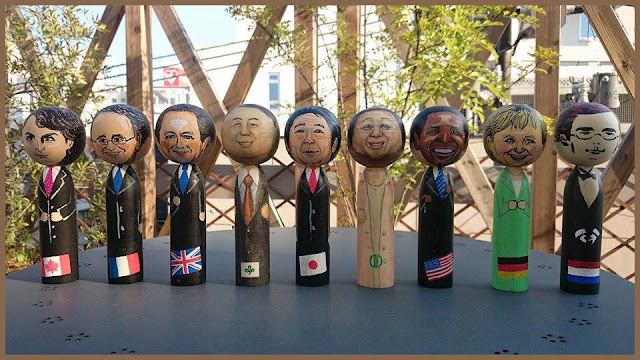 A great collection, here are just the names of the kokeshi 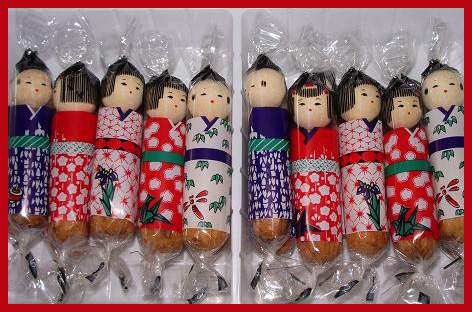 The head is a big nut or bean, the body is a stick with coated senbei.