Amakusa (天草), which means "Heaven's Grass,"
is a series of islands belonging to Japan, off the west coast of Kyushu in Kumamoto prefecture.
Amakusa, along with the neighboring Shimabara Peninsula, became the site of a Christian rebellion in the 17th century.
© More in the WIKIPEDIA !


The Shimabara Rebellion 島原の乱, Shimabara no ran
was an uprising in southwestern Japan in 1637–1638 during the Edo period. It largely involved peasants, most of them Catholic Christians.
In the wake of the Matsukura clan's construction of a new castle at Shimabara, taxes were drastically raised, which provoked anger from local peasants and lordless samurai.
..... In the wake of the rebellion, the rebel leader Amakusa Shiro was beheaded, and persecution of Christianity became strictly enforced.
Shimabara (島原市, Shimabara-shi) is a city located on the north-eastern tip of the Shimabara Peninsula, in Nagasaki prefecture.
© More in the WIKIPEDIA ! 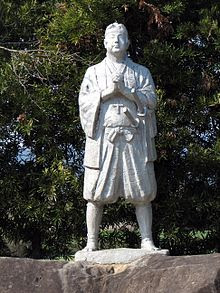 also known as Amakusa Shirō Tokisada (天草四郎時貞) was the teenage leader of the Christina Shimabara Rebellion.
Shiro led the defence of Hara Castle and defeated the strongest of the Shogunate attackers in a series of coordinated defensive surges.
© More in the WIKIPEDIA ! 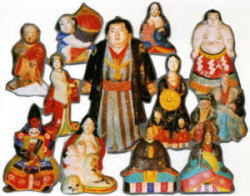 They are made since 1717, when the ronin Hirota Wahei 広田和平 started a kiln at the access road to temple Tookooji 東向寺 Toko-Ji and began selling simple dolls.

One of the favorite dolls is the 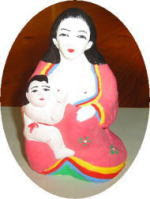 yamanba 山姥（やまんば） old mountain wife, who breastfeeds a baby.
This is said to be a symbol of Mother Mary feeding the baby Christ.

Amakusa was known for the large Christian community. 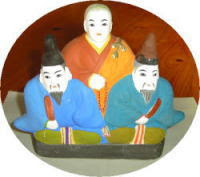 Suzuki Shigenari 鈴木重成 (1588 - 1653)
He was the third son of 鈴木重次 the daikan governor of Amakusa on behalf of the Tokugawa Shogun.
He repeatedly asked the shogunate for a reduction of the rice taxation, from 42,000 koku to 21,000 koku. He committed ritual suicide (seppuku) in Edo to achieve this reduction successfully, though there were rumours that he died through disease.

His brother took to Zen Buddhism and became a priest, named Shoosan 正三和尚 and tried to help the poor farmers of the region.
His son, Shigetatsu 重辰 was adopted by Shigenari to become the second official governor of Amakusa. 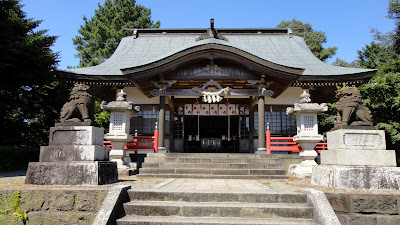 Now they are all worshipped at shrine
Suzuki Jinja 鈴木神社

Suzuki Shigenari became the deity
Suzuki Myoojin 鈴木明神
and a part of his hair is kept in his grave. 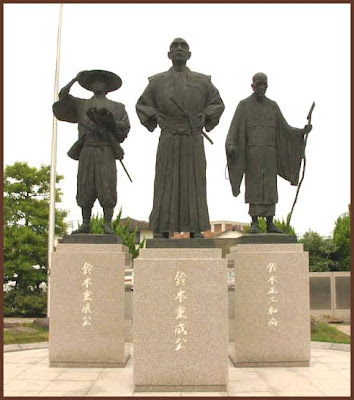 Statues of the three Suzuki 鈴木三公像 at the shrine 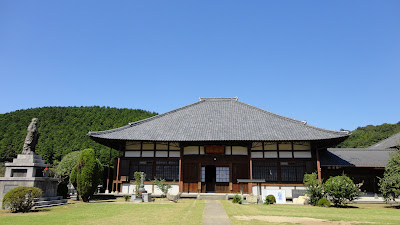 It was built in 1648 after the Shimabara rebellion to appease the people.
To show the power of the Shogunate in Edo, the ceiling was lavishly decorated with flower and bird images. 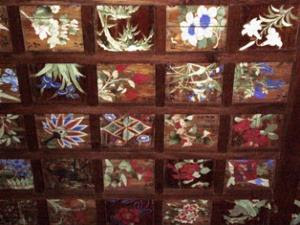 
The 15th priest of this temple, 天中和尚, made efforts to bring potters to the region and supported the potters from Takahama, like
Kato Tamikichi 加藤民吉 (1772 - 1824). 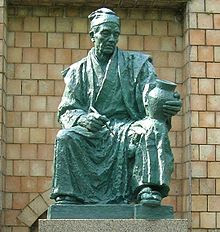 © More in the Japanese WIKIPEDIA !

Tamikichi worked for a while in Takahama at the kiln of the Ueda family
Ueda Dengoemon 上田伝五右衛門, who had established the kiln in 1762.
Later Tamikichi moved on to Nagasaki, then Arita.
After a few years of study in Kyushu, he returned to Seto.

Kato Tamikichi is revered to our day at the shrine
Kamagami Jinja 窯神神社 in Seto, Aichi.
He is regarded as the "father of porcelain" it Seto. 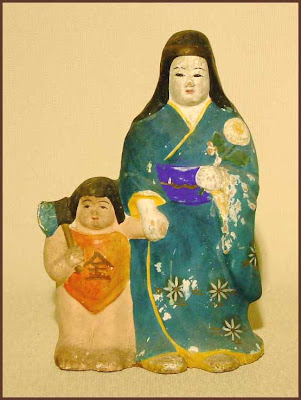 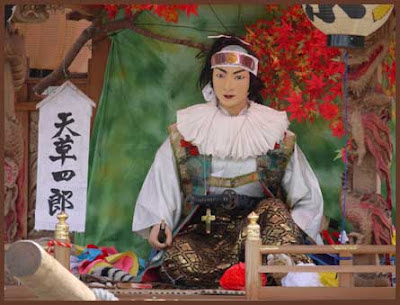